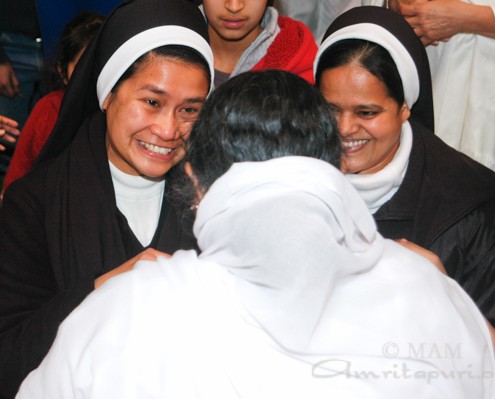 Amma’s first ever trip to South America began in Santiago, Chile, a metropolis nestled in the beauty of the Andes Mountains.

Shortly after Amma’s arrival in Chile, she was officially welcomed at the Casa de Moneda Presidential Palace by no one other than the President of Chile herself, Michelle Bachelet. Bachelet (Chile’s first woman president) met with Amma for nearly 40 minutes, saying upon the beginning of their meeting that she also enjoys hugging people when she meets them, but that she did not have the stamina to hug stadiums full of people like Amma. “Though ‘Amma is not so much into religion, she is into humanism’ and that’s what attracted her to Amma and that she appreciated what Amma had been doing for the poor” said the President. Bachelet agreed with Amma that economic growth, though important for the country, was not enough, that people needed to have values and principles to ensure peace and happiness in society.

If there was any question regarding how a city that is 93 percent Christian (68.7 Catholic) would respond to Amma, it was answered the next morning. Almost as soon as the sun rose over the Andes, an enormous crowd began to descend upon the Espacio Riesco convention centre. The humongous hall was full well before Amma’s arrival, and when Amma did arrive, she was greeted by thunderous applause. In fact, for the next three days, every time Amma entered the hall, left the hall or finished singing a bhajan, the enormous applause followed.

It was clear that the people of Santiago saw in Amma what people have been seeing all across the world for the past 20 years now—a spiritual leader who is not here to change anyone’s religion but simply to lead them to Love, the common heart of all faiths.

“I kept forgetting that these people had never met Amma before,” commented one of the program’s organizers. “And they especially appreciated the many songs that Amma sang in their native Spanish.”

During the morning programs, Amma was surrounded by every major press agency in the country. Amma’s visit to Chile was truly a major news event, with reports even appearing in a few U.S. papers.

During the next three days, the crowds were so large that each program blended into the next with almost no break in between the morning and evening programs. The morning darshan would go from 10 a.m. to 6 p.m. and then evening programs from 7 p.m. till 6 a.m. The culmination of the crowd took place on Devi Bhava, when during the Atma Puja, the enormous hall was bursting at the seams with people. The queue for the puja had actually begun forming during the Amma’s morning darshan program. And during Bhava darshan, the line for mantras was almost as long as the darshan line—about 90 percent of the people who came for darshan requested Amma to initiate them into a mantra. 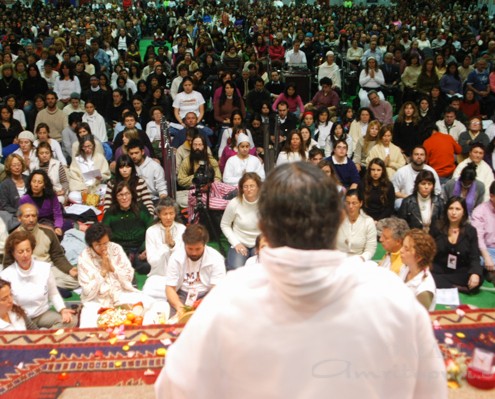 The people of Chile also had the good fortune to have Amma in their presence for Guru Purnima, which took place the night of Devi Bhava. Near the end of the Devi Bhava program, Swami Amritaswarupananda gave a beautiful talk on the significance of the Guru and reminded everyone how fortunate we all are to have a satguru, a true mahatma, in our lives.

Before leaving Chile for Brazil, Amma met with several of the local devotees who’d helped organize the program. It was truly amazing that the programs had gone so smoothly when none of the people involved had ever organized a program before and the majority of volunteers had not even met Amma before. In fact, many of the volunteers had taken a week or more off work in order to dedicate themselves full time. Gazing lovingly into the eyes of her Santiago children, Amma asked, “How did you do it?”

Immediately one of them replied, “With love.”

Hearing this Amma nodded in approval and smiled saying, “That’s right, where there is love, anything is possible.”