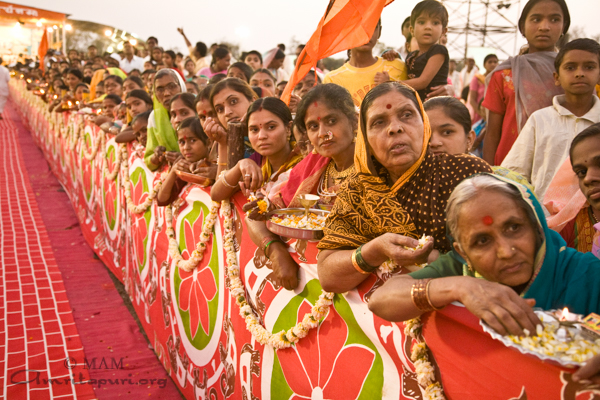 There is an old Marathi saying: sadhu sant yeti ghara toci divali dasara—When sadhus and saints visit your house, it is the real Divali and Vijaya Dasami. When Amma came to give darshan in Washim, the villagers there proved their faith in this maxim by dedicating themselves fully to the celebration. Every house was cleaned and decorated in traditional festival style. Rangoli were drawn at door-fronts, mango leaves were hung from awnings, the stocks of banana trees were fixed before houses, dipams were lit and water sprinkled about as a rite of purification. In Maharashtra it is also a tradition to have guests stay in one’s house for Divali, so near and dear ones were also invited to come and participate in the function.

But this was only on the day of Amma’s arrival. In fact, preparations had been going on for months—even before it was announced that Amma would be coming to Vidarbha. When the rumour of the possibility of Amma holding a program in the town began to spread, 125 people went to a local temple and offered archana. By the time the date was set, there were more than 1,000 volunteers to help with the arrangement.

The volunteers, literally, personally invited each and every family in the area. This was also done in traditional fashion. Ladies, in groups of five, went house-to-house. The first lady would place a sticker of Amma on the door, the second would apply kumkum to the forehead of the lady of the house, the third would bow to her feet, the fourth would offer her the invitation, and the fifth would take down the family’s name and address. In this way, more than 100,000 hand-written invitations were issued. 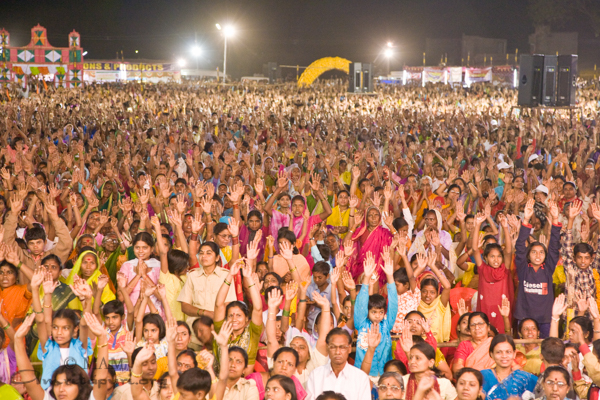 From the beginning the program was the people of Washim’s own, and everyone there got involved, including many non-Hindus. A group of villagers from the Muslim faith arranged for banners to welcome Amma in Urdu. Another donated 30,000 oranges to use as prasad. Another man donated chai for 10,000 people. Even the rickshaw drivers got into the spirit, announcing that they would charge half prices on the night of the program.

“The people here are of many sects, many religions and have many family gurus, but all felt that Amma was their own mother,” said a brahmachari from Maharashtra who helped organize the program.

One man offered to donate all the milk needed for the program from his dairy, located 70 kilometres from the venue site. The man said that a few years before his brother, a farmer, had committed suicide due to the burden of debt. Saddened by the fate of his brother and too many other Vidarbha farmers, the man offered the milk, praying it would help their souls find peace.

Such samskara [spiritual culture] is part and parcel for Indian villages like Washim, the histories of which have found their way into the puranas and itihasas of Bharat. Vidarbha is in fact the land of the pancha kanyas—five virtuous princesses: Lopamudra, the wife Agastya Rishi; Keshini, King Bhageeratha’s mother; Indumati, Lord Rama’s paternal grandmother; the princess Damayanti; and Rukmini, Krishna’s first wife. And it was in Washim itself where King Dasaratha was hunting and accidentally killed young boy, through the misuse of his sabdavedi vidya, resulting in the curse that was fulfilled through Rama’s exile.1

On the morning of the program, 150 devotees performed abhisekha to the local deities—Balaji and Madhyameshwar—requesting that there be no obstacles in the function. The devotees also invited the deities to come to the program for Amma’s darshan!

While Amma was giving darshan, a brahmachari working in the kitchen told Amma that the khichadi prepared by the Washim devotees was very tasty. Amma immediately asked him to bring a plate for her. He did so, and Amma tasted it as she gave darshan, relishing the devotion with which it was prepared. She then asked for someone to call the devotee and Amma gave him a very special darshan. Afterwards he told one brahmachari that for 32 years he had been suffering from back pain, and that when Amma had held him, her hand had pressed exactly on that point. To his surprise, after his darshan the pain was gone.

After the program’s conclusion, for many, life in Washim continued to revolve around Amma. “Everyone was talking about Amma, discussing Amma, crying over Amma,” said one of the brahmacharis in charge. Already Amma’s new Washim devotees have begun planning a pilgrimage to see Amma, with arrangements being made for some 1,500 people to come to Amritapuri in August 2008. 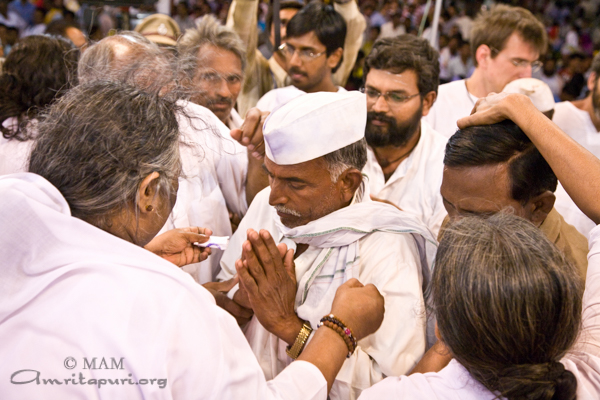 In fact, Amma’s visit has not only offered the people of Washim spiritual solace, but also material upliftment. During the program, Amma offered a number of people the opportunity to come work at the Ashram’s AIMS Hospital in Cochin, Kerala. And at Amma’s suggestion, devotees from Indoor and Nagpur are considering starting businesses in Washim in order to expand the employment options of the people there.

As for the people of Washim, they only want one thing. They told Amma as much during her visit. Seeing the purity of their devotion, Amma had asked some of them, “What do you want here, children?” They responded, “Only Amma. If Amma is here, all will come. We don’t need to ask for anything separately.”

1 Dasaratha, the King of Ayodhya and father of Lord Rama, was once hunting in Washim. He was an adept archer and had mastered a subtle skill known as sabda vedi—the ability to discern and strike targets by sound alone. Hearing what he believed to be an elephant, Dasaratha let an arrow fly, only to kill a young Brahmin boy by the name Sravana Kumara. Sravana Kumara’s father, a rishi, cursed Dasaratha, saying, “May you, too, one day know the pain of losing a son.” This curse would find fulfilment many years later when Dasaratha was forced to send Rama into exile for 12 years.