During the Melbourne Retreat, as the first morning program drew to an end, Amma announced that she would like to dance with all her children. After the last person received their hug, Amma stood up, and asked everyone to move back and form a large circle around her. She held a pair of kaimani [hand bells] and asked the devotees for song requests. Many called out “‘Mata Rani’! Dance to ‘Mata Rani’!” Laughing, Amma nodded her head and began to sing, “Mata Rani ne kripa barsayi…” As she began to dance, she passed the kaimani to someone else and then raised her hands into the air and called out, “Mata Rani ki!” 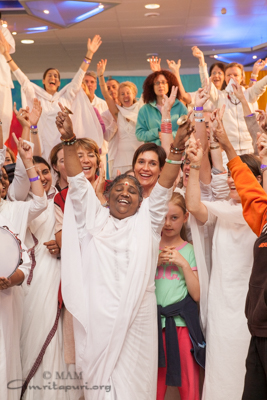 In between lines, Amma playfully told the devotee “Make faces! Make eyes!” She then demonstrated, glancing playfully from side to side, arching her eyebrows and making loving eye contact with those around her. She then added a new element to the song, creating a break between a few words and then crying out, “Hoyi!” The devotees would sing “Mata Rani,” and Amma would respond “Hoyi!” before continuing the verse.

As the song finished, everyone stood in contented silence around Amma. Amma held her eyes closed, absorbed in stillness for a few moments. Then, in the midst of the silence, Amma slowly started to sing out “Narayana Narayana Jaya Govinda Hare…” The harmonium immediately picked up the tune, and soon the devotees raised their voices again to join her. In this second dance, Amma kept her eyes closed the entire time, rocking back and forth in bliss. As she finished, she sat down and asked everyone to meditate for a few moments, feeling themselves filled with divine bliss.

After a few minutes, Amma stood up and quietly exited the hall. In order to reach her room, Amma had to walk outside, next to an open meadow. As she walked, Amma maintained complete silence, and gazed at the sky and grass in front of her. Just before she reached her room, Amma’s eyes caught sight of a huge flock of birds suddenly bursting into flight across the open sky. Seeing this, Amma joyfully cried out, “Oh!” and stretched her arms towards them. She then imitated their flight by waving the palms of her hands. Smiling, Amma she then turned and entered her room, leaving those around her touched by this quiet third dance with nature.