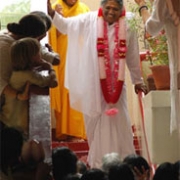 Amma returned to Amritapuri on Sunday, July 30th, 2006, after the recent Japan-North America yatra. She arrived at about 10:45 a.m., bringing smiles, laughter and tears of joy to the faces of Her children who had gathered to welcome Amma.

In the throng of devotees were freshmen of the Amrita University (Amritapuri campus), who had just started their first semester. To the uninitiated among them, the sight of the crowd’s ardent devotion may have been a wonder. It proved infectious. Many of them asked, “When can we meet Amma? When can we get Her darshan?” The students, who were from various parts of India, craned their necks to catch a glimpse of their beloved Amma. Many voices, from many directions, called out “Amma! Amma!”

Amma, beaming with loving compassion, looked left, right, in front, behind and even above, for there were people crammed on the balcony above and lining the spiral staircase near Amma’s room too. After spending some time chatting with Her children and cracking jokes, Amma walked back to Her room.

Amma is making our world a better place

Go beyond the mind
Scroll to top