“A mother gives amrita [nectar] to her children; this is indicated by Amma’s name itself,” said Dr. T. Subbirami Reddy, Union Minister for Mines. “Just by getting her darshan we are filled by that shakti [divine energy].” Dr. Reddy was addressing the 30,000 or so people who’d come for Amma’s one-night darshan program at Parade Grounds in Secundarabad on 22 February. “Beauty is not permanent, money is not permanent, but God’s shakti is permanent,” he continued. “And Amma is showing that through giving her Amrita to millions all over the world.” 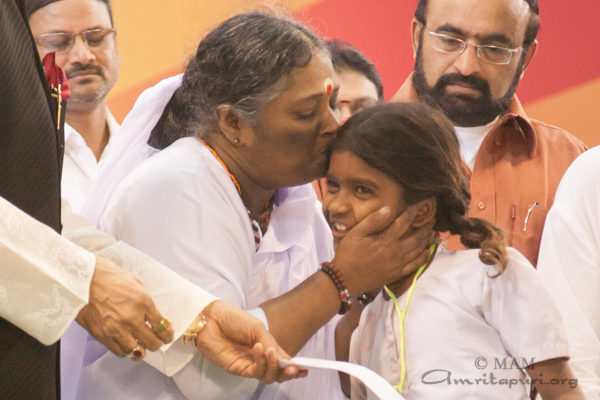 Dr. Reddy also helped Amma distribute scholarship stipends to children from impoverished agricultural families living in the rural regions surrounding the Twin Cities of Secundarabad and Hyderabad. The distribution is part of the Ashram’s Vidyamritam Program—the provision of 100,000 scholarships throughout India to children of agricultural families living under the poverty line. Many of the children had previously been forced to discontinue their educations due to their parent’s inability to afford even the most basic of school fees. In response to Vidyamritam and other Ashram social-service projects, Dr. Reddy said, “It may be the first time in the history of the world someone is doing something like this.” 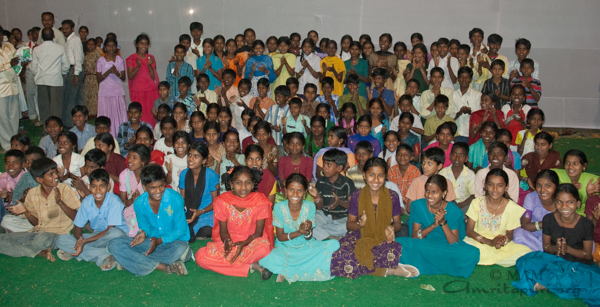 Once darshan started, 1,500 Vidyamritam enrolees came forward to receive Amma’s embrace. Some came with their parents, but others came alone, as their parents had committed suicide due to due to financial despair and inability to repay agricultural loans.

Smt. Panabaka Lakshmi, the minister for Health & Family Welfare of Andhra Pradesh, was also on the dais, as was the district collector of Hyderabad, Sri. Chandravadan; the additional private secretary to the chief minister, Sri. P. Subrahmaniam; and the chairman the State Bank of India, Sri. O.P. Bhatt. 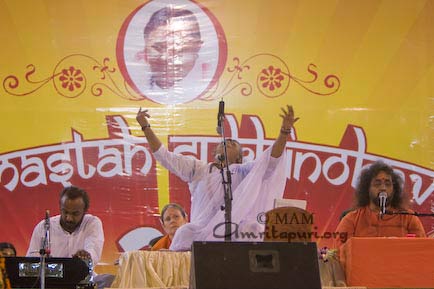 The chief minister of Andhra Pradesh, Dr. Y.S. Rajasekhara Reddy, was unable to attend the program as he has in the past. However he did send the following message in his absence: “Amma is translating the saying Manava seva Madhava seva [service to man is service to God] into practice in providing educational scholarships to 5,000 children drawn from families of poor and distressed farmers [from Andhra Pradesh] and inspiring the philanthropists to emulate such a noble cause.”

Darshan continued throughout the night, ending only past sunrise.