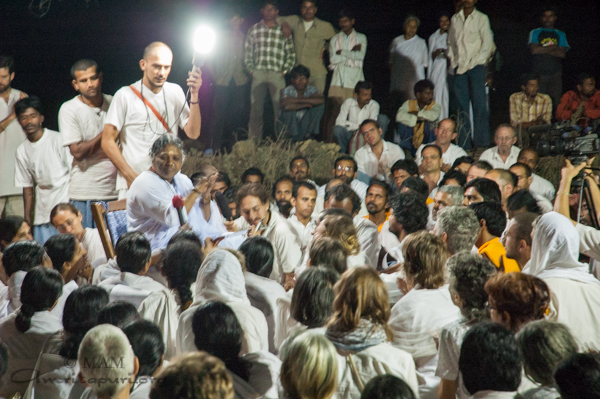 Not far past the border from Andhra Pradesh into Maharashtra, Amma and the caravan of busses pulled off to the side of the road. Everyone got out and sat around Amma on that quarry grounds. Granite pieces were there all around. The moon was near full and the night air was cool, a welcome respite from the hot interior of the busses. On the lot, just behind Amma, was a small shrine. There were no walls—just a 12×12-foot smooth rock floor with two or three small boulders in the centre. The boulders had been anointed with turmeric, rice powder and a garland. The shrine was to God in the form of the earth element—one of the five great elements that comprise the physical world. 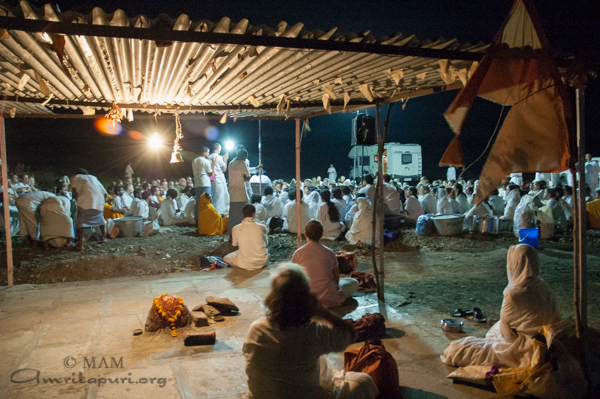 Seeing the shrine, Amma commented on its innocence and the simplicity of the sankalpa behind its creation. “When you worship God in the form of the rocks, the rough rock of one’s ego is sculpted into an image of the Lord,” Amma said. “Imagine the innocence and purity of heart needed to see Shiva or Ganesha in those rough, unchiselled rocks.”

Behind Amma’s ashram in Bangalore, where Amma had just been the week prior, there is an enormous banyan tree, which is similarly worshipped as an embodiment of the divine. And in Kumbhakonam, Tamil Nadu, where Amma had given darshan in January, there is a 6.2 acre bathing tank, bathing in which one immerses himself in God. In Chidambaram it is Akasha Deva—God as the very space in which one moves… There are countless such “living temples” throughout India, each one a testament to how, as Amma says, “The creation and the Creator are not two.”