Initially we thought we were going to leave Jaipur before sunrise, but then word came that we would not be leaving until after noon. With the tour’s rigorous schedule, I was happy to be able to sleep in. However, myself and others were concerned that we were setting ourselves up for a colourful Holi attack. 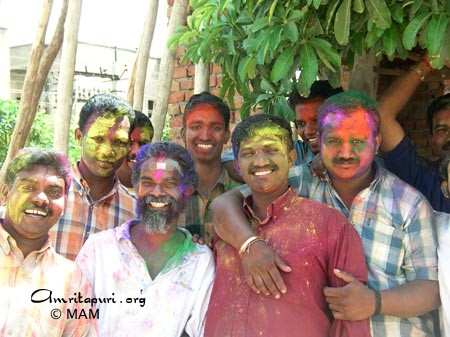 Eight buses, several of them full of Westerners, driving through Jaipur in broad daylight would appear to be a prime target for any Holi revellers. I had heard that on previous tours powder had been tossed at the buses and some Westerners had been hit through opened windows. Regardless of how symbolic the throwing of powdered paints may be, when you’re tired after being up all night, facing a five-hour bus ride, and wearing your only clean pair of white clothes, your enthusiasm to celebrate is greatly diminished.

In the early morning, the streets seemed quiet. We were in a quiet part of town, and I felt that not much would happen. Anyway, the school in which we were staying was protected like a fortress with a high boundary wall. To get in and out, you had to pass through an iron gate. All we had to do was load the buses, which were just outside the gate, board quickly and close the windows. 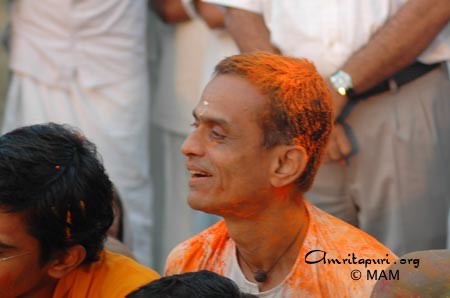 But as it got later, I began to hear the banging of drums, cheering and voices in Hindi singing various songs. It wasn’t coming from right outside, but it was too close for comfort. No matter, at least had our fortress to protect us.

However, around 11 a.m.—just when we had to start loading the buses—a band of young Indian ladies, covered from head to toe in varying hues and carrying bags of powdered paint, apparently realized they could capitalize on our predicament. Unable to resist the large number of potential targets inside the school, they decided to position themselves just outside the gate and wait for us to emerge with our bags. Then the Ashram bus drivers (who are from Kerala) started to play Holi. We could hear the antics of the drivers, the locals and the young women in the streets.

Since we had to eventually leave for Delhi, some of my fellow Westerners began to brave the gauntlet and headed outside with their bags. They were quickly ambushed by the women, and many of them came back with green and red streaks of powdered paint in their hair and on their clothes. Some were a bit annoyed, others slightly miffed. No one really seemed able to embrace the revellry.

Most of us remained inside the safety of the school, hoping to wait out the celebration and thereby protect our white dhotis and saris. Some openly enjoyed watching their fellow Westerners get painted. But eventually everyone had to go outside. 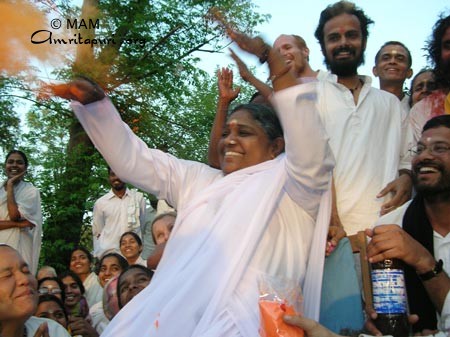 When I headed out, I tried to explain to the ladies that I was a foreigner and therefore should be spared, telling them that I did not really understand the meaning of Holi in the first place. I begged them to have mercy on myself and all the other Westerners. But it was like trying to tell a child not to trick-or-treat on Halloween or to not light firecrackers on Independence Day. We settled on a consolation—one of them could paint a small green tilak on my forehead. I figured that the small gesture would indicate that I had already “played Holi” and that I would then be spared of any future onslaughts. I was wrong. No sooner had the tilak been applied then the woman’s hand slid down the right side of my face and I was stained in bright green and orange. Now I was apparently fair game. Being chased by the women, I ran into the safety of the school, only to find that those Westerners who had already been painted were now running after each other with coloured powder of their own. Many had to retreat further into the school for safety.

While the Westerners were playing cat-and-mouse with the band of Indian ladies and each other, a few of the brahmacharis who had also been hit obtained some colours of their own and started to turn on one another. Many people got hit. Some cheered, others ran and hid. After about an hour like this, the band of ladies apparently became satisfied that they had accomplished their mission and departed.

When we finally boarded the buses, we all rolled up our windows. As we drove through Jaipur, I saw hundreds of people covered with colours. We passed motorcycle after motorcycle of two, three, even four, people covered from head to toe in colours. Men, women, children and drivers—no one seemed to have been spared. I even saw some dogs and cows sporting paint. But eventually the colours of the city gave way to the fields of the country. Relieved, I closed my eyes and went to sleep. 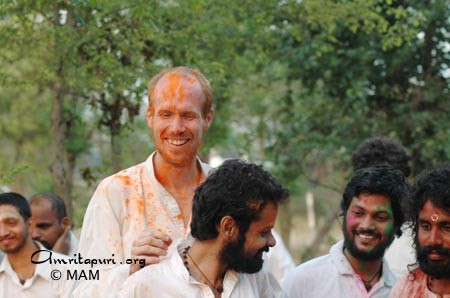 Around sunset, when we were maybe two hours from Delhi, we pulled over to stop for tea and to spend some time with Amma. Almost everyone who had thought they’d made a clean Holi getaway was wrong. After Amma sat down in the field—with all of us around her—someone offered her a couple packets of powdered paint. To make a long story short, she blessed us in true Holi style. I was ecstatic. I was sitting almost right in front of Amma. With a beaming smile, she showered fistfuls of colours on all of us. Soon I had bright florescent-orange and pink paint staining my clothes. Whereas earlier I was running from the Indian ladies at the school, here I was eager to have Amma throw powder at me. Then, as I watched Amma paint the face of a woman devotee sitting next to her, I wanted to leap up and ask her to do the same to me. It was such a blissful and joyous celebration.

Sitting in front of Amma, covered with powder, it occurred to me that the fortress-like school we had stayed in back in Jaipur could be likened to the ego. We spend countless lifetimes in such a fortress. One can hide behind it for as long as they want, but as long as one does, he or she is never truly able to join the celebration of life. By throwing powder on us, Amma was tearing down the walls of our ego, encouraging us to become a celebration of the Divine Truth that is our real nature.

It’s a scary proposition, but once we allow the wall to come down—and allow the Guru to paint us with his teachings and his grace—we realize what fools we were to have been hiding.

What a beautiful way to learn the meaning of Holi.