At the end of each of Amma’s tours, there is one question in the hearts of many of the brahmacharis, brahmacharinis and devotees traveling with Amma: “Will Amma call us for darshan?” Sometimes she does, and sometimes she does not. 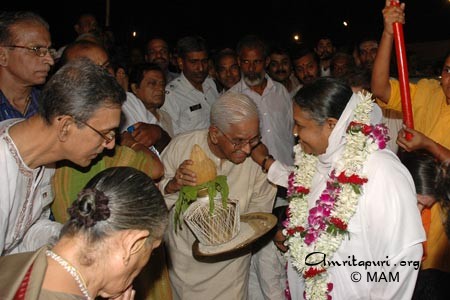 In the early days of the ashram, Amma would call the ashram residents for darshan quite often—as much as once a week. But with each passing year, as more and more people come to have Amma’s darshan, the ashramites go less and less. In truth many of them find their way into Amma’s arms only once or twice a year.

This time, Amma did indeed call, and the last two hours of darshan in Kolkata—the last two or three hours of the Indian Tour—were filled by Amma holding her Ashram children, joking with them about various things that had happened on the tour, inquiring about their health, instructing them regarding their sevas and popping prasad candies into their mouths.

A few devotees from the West, for whom this tour was their first, even asked Amma to give them spiritual names. One American boy received the name “Yati”m meaning “one who is putting forth effort to realize the Truth”, and a young man from Germany got the name “Jayendran”, meaning “victor over the senses.”

Everywhere one looked, one saw smiling faces. After their darshan, some people happily shared with each other what Amma had said to them. Others sat alone, peacefully dwelling on the moments they had just experienced in Amma’s arms. It was almost sunrise when the last of them came for darshan. Another Bharata Yatra was coming to an end.