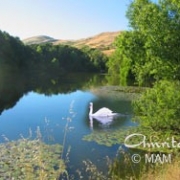 The sun is rising in San Ramon, illuminating the rolling golden hills of Amma’s ashram. The swans in the lake stir from their slumber and begin gliding around the still waters of the ashram pond. The chill desert air slowly warms. The sounds of horses snickering at one another can be heard in the distance. But while outside day is just waking, in the temple it never ended. Amma has been giving bhava darshan all through the night, and at 6:00 a.m. it is clear it will be at least another five hours until she has held the last person in her motherly embrace.

n the mid-1960s, San Francisco’s Bay Area gave birth to the flower-power movement of the hippies—the reaction of America’s youth to the country’s growing materialistic and imperialism mentality. Forty-five years later, it remains home to the movement’s latter-day generation. And they love Amma.

When Amma holds Bhava Darshan, they flock to San Ramon and dance in ecstasy as Amma’s swamis and devotees play an endless flow of bhajans. They typically dance on the temple’s balcony—wrapped in swaths of clothing, dreadlocks whipping through the air, babies strapped to their bellies.

Once, a few years back, on a particular crowded bhava-darshan night, one of the local organizers asked some of the people dancing on the balcony to stop, as it was becoming more and more difficult for people to walk through that area of the temple… Somehow word of it came to Amma.

“Who told my children not to dance?” Amma demanded to know.

Amma is everyone’s mother, and the dancing of these descendents of the hippie generation are no exception. In their hearts they hold firm the ideals of peace, love and compassion. And through her nightly satsang, Amma is also educating them about the nature of the world, themselves and the universe, as well as the relationship between all three.

One of the residents of Amma’s San Ramon ashram has formed a rock band that always plays around sunrise—serving as a kind of wake-up call to any devotee who may have drifted off during the nightlong “love-in.” A favorite of the flower-power kids, the balcony nearly comes crashing down as they dance. They music says it all: 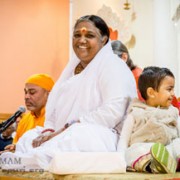 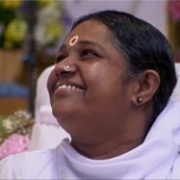 Amma, let us hear your voice

Support Amma in all her work
Scroll to top