The second half of Amma’s Delhi programs were held at the beautiful Ashram venue in Vasant Kunj. With the Bramasthanam Temple at the venue and the beautiful natural surroundings close by, the atmosphere itself seemed spiritually vibrant. The majestic birds of Lord Subrahmanian, peacocks, seemed to welcome all the guests and devotees by their unusual cry. 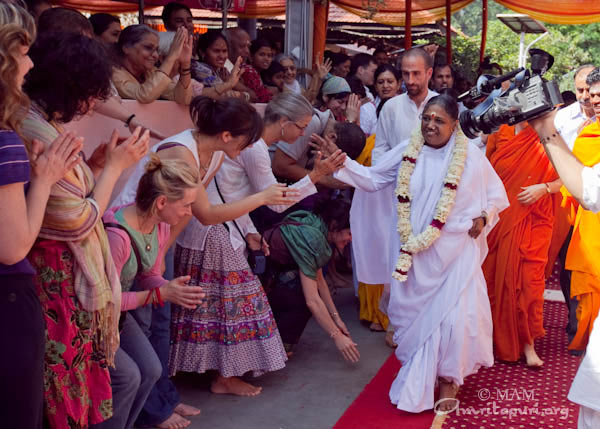 Since the very first day of the program, the local youth,  as part of AYUDH-Delhi, were very active, setting up stalls selling delicacies to help raise funds for Amma’s charitable projects. At night, the temperature would drop down to below 16 degrees, and many people could be seen wrapped up in shawls and sweaters and woolen caps.

The Bramasthanam temple was decorated with strings of yellow marigold and bouquets of white flowers. Homa and puja were conducted all around the auspicious timings and arati bells would chime in harmony. Amma’s two-day program consisted of both morning and evening programs of bhajans, Satsang, guided meditation. Of course, Amma also gave darshan to everyone who had came.

Many people participated in the special pujas conducted during the occasion. There were lines queuing even as the puja started and had to be accommodated at every corner of the Bramasthanam.

After darshan was finished, Amma renewed the festive mood by singing three bhajans, concluding with an exciting version of the Punjabi bhajan “Mata Rani.” As Amma’s hands went up, smiles grew bigger. And when Amma shouted “Mata Rani ki!” the crowd unanimously cheered in response “Jai.” When Amma walked back to her room at 5:30 a.m., many devotees who had tears in their eyes—a mixture of joy, of gratefulness and the pain of already missing Amma more than they had imagined possible.