On March 4th Swami Ramakrishnananda Puri arrived in South America to begin a three nation tour.  Swami’s tour began in Caracas, Venezuela at the northern extreme of the continent.  The programs there were held in the UNESCO headquarters in Caracas, the ‘Monumento de la Paz’ or ‘Monument of Peace,’ a very unique building, designed to be a visual symbol of tolerance and peace. The first program was well attended with more than 300 people packing the colonnaded main auditorium.  The program ended with a very enthusiastic question and answer session in which people continuously expressed their gratitude for having learned more about Amma and her teachings and also their desire to bring Amma to their country.  The following day, more than 150 people participated in an IAM technique class. 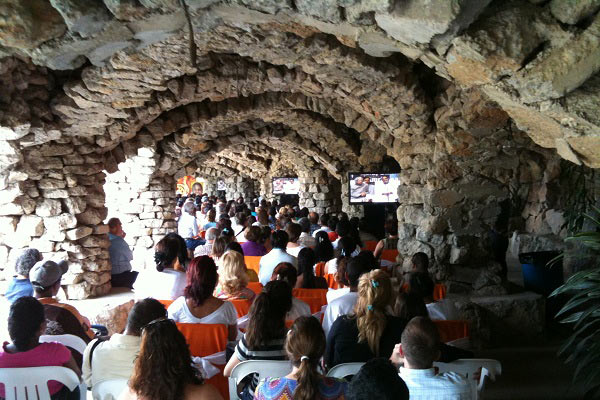 From Venezuela Swami traveled south to Lima, Peru, where two days of programs were held in a beautiful hall overlooking the Pacific Ocean.  More than 1000 people attended the lively programs over both days.  On his last day in Peru, Swami was invited to address a meeting of business executives at the ‘Club de Empresariales’.  Swami shared how Amma’s teachings can help them not only become better managers, but how they can come to manage their own minds.

To conclude the tour, Swami flew over the Andes Mountains, the Amazon rainforest and the vast open pampas landing on the Atlantic coast of Brazil, visiting Sao Paolo, Rio de Janeiro and Araruama.
During the two days of programs in Sao Paolo, attendees brought donations for the victims of the ongoing flooding in the area. The local satsang group from Santa Catarina has been providing continuing relief service to the victims for the past year.  Swami led everyone in a special prayer for those affected by the floods.

The following day Swami held a program overlooking the famous Copacabana beach in Rio de Janeiro.  It has been almost three years since Amma’s first and only visit to this city. During Swami’s question and answer session the main query all wanted answered was, “When is Amma coming back?”

The final program of Swami’s South America tour took place in the same location of Swami’s first visit to the continent 12 years back, at the Templo Amrita in Araruama, Brazil, about two hours outside of Rio.  In the peaceful countryside, Swami guided the attendees in a puja for peace and prosperity.

Since Amma’s visit in 2007, her children here in South America have been praying for Amma’s prompt return,to bless their continent once again.  Swami’s visit helped intensify those prayers .