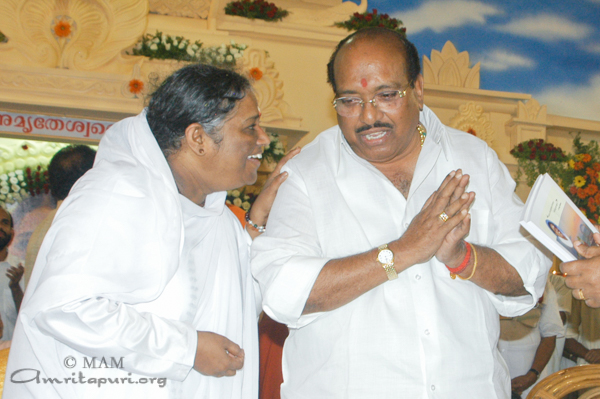 “Amma is a chiranjivi [one who lives on earth forever]. Amma’s deeds themselves have made Amma immortal. Amma will be here until the end of the world as a chiranjivi.

“Each of Amma’s actions come from love alone. Through that, she is doing many good deeds. Look around you! The world has assembled under one roof—people of all languages, casts and religions. The meaning in this is that Amma is the Mother of the World.

“How many dharmas and karmas Amma is performing! No other ashram is able to do this. It should be the role model for other ashrams, and they should develop the inner vision.

“Those who are suffering, those who are sorrowful… Amma is going there and meeting them and giving them small lamps of love. Amma is giving them hope. She is extending her hand to orphans, pulling them up. Amma possesses such a great mind! The Mother of the World. My words may not be doing Amma justice.

“I am not saying this to glorify. I, as the secretary of the SNDP, am saying that only Mata Amritanandamayi Math is successfully implementing a combination of spiritual and worldly dharmas, as Gurudevan stressed. In saying this, I am not exaggerating.

“Amma has come down to the level of the people, understood them, their thoughts and feelings, and has been traveling the entire world for them. I also have been traveling a lot. Wherever I go, I meet Amma’s devotees. In the houses I visit, I see Amma’s photos. There are devotees who love Amma all around the world. Amma has given love and that love is being returned. Furthermore, Amma is giving that love back in thousand folds to the people in the form of houses, pensions and financial support.”