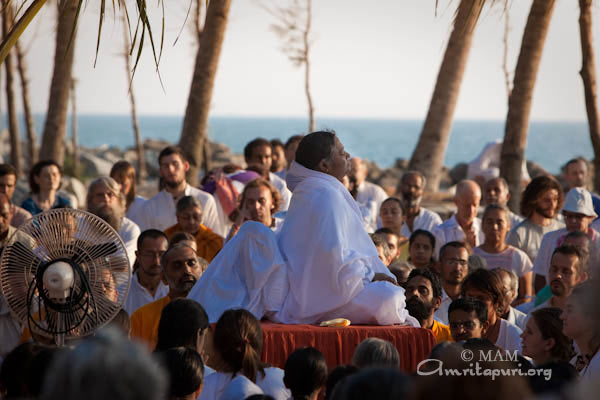 A beautiful blue-green sea and a sunny evening turned became the backdrop for another cherished session with Amma. Amma sat below a coconut tree on the Ayurveda beach grounds. After leading a short meditation, Amma answered a question asked by a brahmachari.

Amma responded,  “All these practices are for us to go deep within us. God and Guru are within us. But the mind sees the gross and we don’t seem to realize the Truth. Amma remembers a story of a crow from her school days. A thirsty crow comes across a pitcher with the water within too low for it to reach. Out of his urge to quench his thirst, the crow keeps on dropping stones into the pitcher till the water level rises and it can drink. Because of the thirst, the crow made an effort. In the same way, we need to put in effort to bring out the knowledge within us. Through our self-effort and with alertness, we can bring out the Knowledge within us.” 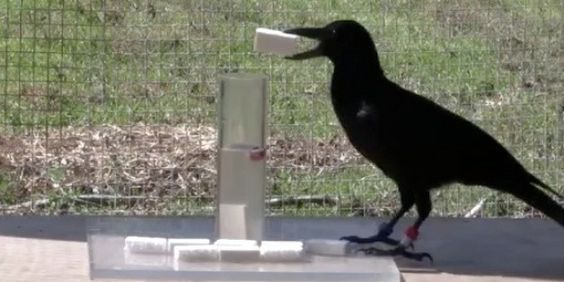 “In today’s world, people pretend to sleep. One can’t wake them. In the same way, we are not yet ready to wake up. In fact, the disciple has to open the door so that the Master can enter,”  Amma explained.

Amma went on to point out, “Our mind pulls us in all directions.  Through the Mantra one tries to focus the mind and through that we gain energy. Like a magnifying glass causes the rays of the sun to converge at a point to such an intensity that it can produce fire. Through spiritual practices, one can save a lot of energy and use the same to do good for the world. If a normal person can be compared to a light bulb, a tapasvi (a serious sadhak) is like a transformer. He can do a lot of good for the world.”

Amma remembers a lawyer who used to have a habit of clicking the pen while arguing a case. The constant clicking used to help him relieve tension and he was able to focus and thereby won several cases. One day he forgot the pen and his mental tension got the better of him, his argument was pathetic and he lost the case. The insignificant pen was helpful in easing his tensions. It may sound irrational. But it had practical value. Similarly these spiritual practices help us to ease the mind.

“People talk of Pranayama and say training in rapid control of breath is good for concentration. If rapid breathing gives concentration, all asthma patients would have attained Self-Realization,” Amma joked.

She continued, “We need to do practices with knowledge and awareness.” Amma also explained how the Ma-Om meditation was discovered.  When she was small, she used to walk on the beach. The ebb and tide of the waves sounded like Ma and Om to Amma. Ma-Om became like the breath, continuous and automatic. Thus, every step on the beach was meditation.

Indicating  that there is no point in changing the type of practices, Amma pointed out how impatient we are.  “People are so impatient. They jump into sudden conclusions. A bird was sitting in a harbor and wanted to go to the other side. It saw a ship and thinking that the ship will take it to the other side of the harbor, flew to the mast and perched on it. The ship started on its course and in some time was far out in the sea. As time passed, the bird got impatient and started flying in the north hoping to reach land. After a time it got tired and flew back. Later it tried flying south.  It had to come back, it was getting exhausted. The bird then tried east and west and seeing no land had to return back to the ship each time. Only when the ship neared the other harbor, could the bird see land, and shortly thereafter they reached the shore. If the bird had been patient, it would have anyways reached the land with the ship without flying hither and thither.

Amma concluded by explaining, “Likewise, true happiness is already within us. Be steadfast in your practice. Practice regularly. When the awareness grows, we will merge into that reality, that happiness within us.”