During the two festivals “Raksha Bandhan (or ‘Rakhi’)” and “Bhaidooj” sisters and brothers show their love and respect for each other by tying a thread around their sibling’s right wrist.
This morning, over 400 students at Amrita University’s Engineering, Arts and Sciences, and BioTech Colleges had gathered to participate in a modified version of these traditional festivals – they would show their appreciation for Mother Nature by adopting a tree or bush on the campus by tying a ribbon around a branch or stem and taking a pledge to care for the plant by watering and nurturing it. Upon graduation, they will pass the responsibility on to a younger student who will continue the care. 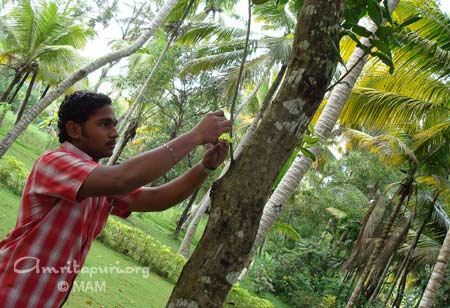 Called ‘Vriksha Raksha Bandhan’, the program was initiated in response to Amma’s message that we should care for the earth. Vriksha means Tree in Sanskrit. Professor Bippin Nair began by adopting his own tree in the courtyard of the Biotech building while onlooking students chanted ‘Lokah Samastah Sukhino Bhavantu.’

Immediately afterwards, students spread out over the campus, ribbons in hand, searching for a green ‘brother’ or ‘sister.’ Some had planted saplings in the weeks or days before, as had Arjun, a Junior studying Computer Science. His ‘sister’ is a small mango sapling located on the north side of the main building. “I’m doing this to help make the world greener,” he said as he gingerly placed the ribbon on one of the branches. Each tree will also have a separate tag that lists the adopting student’s name, the year of graduation, plant type, and name of the plant.