The Vice President of India, M Venkaiah Naidu invited Amma to his residence in Delhi. She had a meeting with his family members. 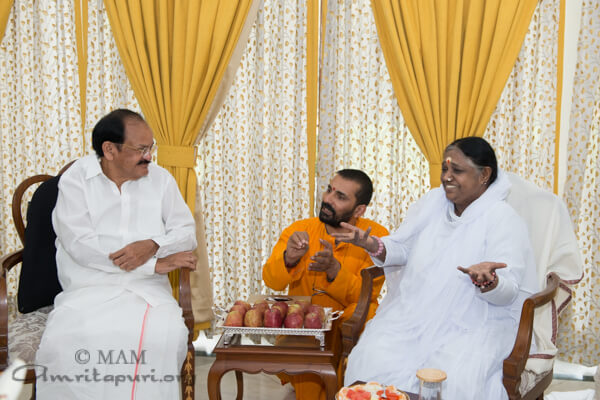 Venkaiah Naidu invited many dignitaries to his house to meet Amma in an event where they exchanged in discourse and received Amma’s blessings. The program was hosted in the newly built Sardar Pater Hall inside the Vice President’s house. This was the first program conducted in the hall, which was inaugurated the day prior.

Addressing the gathering, Vice President of India, M Venkaiah Naidu, said, “Sri Mata Amritanandamayi Devi is a great inspiration to the people who wanted to do something for the society. Amma is an embodiment of Love and Compassion, Insight and Inspiration, Wisdom and Action, Laughter and Light. She is like a mother who gives her love and affection to her children. Amma does not make any distinction between her children.” 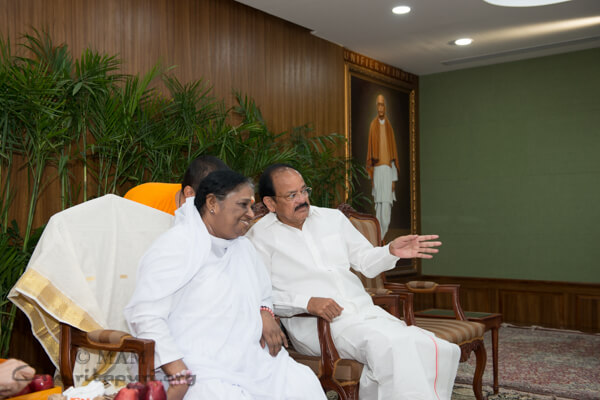 Venkaiah Naidu said, “She is a symbol of Universal Motherhood which accepts and embraces everything, a life of pure giving and celebration. She is an example who can extend the love and affection to human beings with her extraordinary qualities and missionary zeal.”

Deputy Chairman of Rajya Sabha, Prof. PJ Kurien said, “Amma is the embodiment of all that is good in our Indian culture. The number of service activities Amma has undertaken in unparallel. Amma accepts all without any distinction of caste, creed, and religion like a mother. She is a wonder.”

Amma met with all the dignitaries and then gave them darshan over a period of about two hours.