At MA Center in San Ramon, California, in honor of the 30th anniversary of Amma coming to the Bay Area and to the United States, devotees held a special ceremony commemorating the moment. 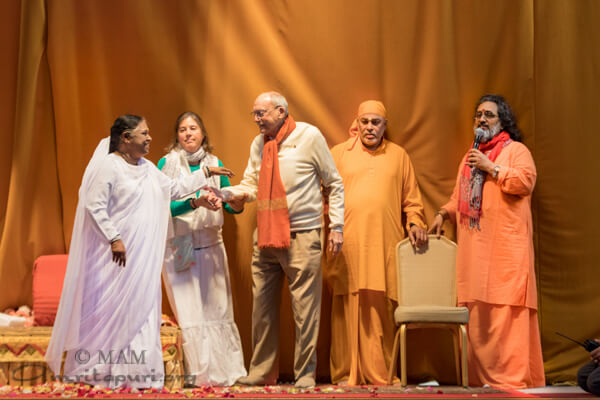 On stage for the occasion were Ron Gottsegen, MA Center President, and Kusuma Gretchen Venkatesh, who organized Amma’s first world tour in 1987, traveling the world in 1986 and 1987 before Amma had ever left India, with just an 8 mm videotape of Amma and her own experiences of living with Amma in the then-very small Amritapuri Ashram. Also on stage were a number of devotees who had met Amma as babies or very small children, and are now grown adults.

Ron Gottsegen opened the ceremony, saying, “Tonight has special significance because it marks a special occasion. his year marks the 30th anniversary of Amma coming to North America. It began in 1986 when Amma told her disciples, ‘My children are everywhere. They are crying for Amma, but cannot find me. Amma must go to them.’ And thus, Amma began her first World Tour, landing at San Francisco International Airport on May 18, 1987–30 years ago.

“It is because of Amma’s immense love, compassion and selflessness that that she comes back to us each and every year. As Amma says, ‘An unbroken stream of love flows from Amma to all beings in the universe.’ For 30 years now, we have been the recipients of this love. And, on behalf, of all Amma’s devotees in the North America, I would like to offer Amma, our immense reverence, thankfulness and gratitude.

“Amma has transformed the lives of everyone who has come to her. In this hall there are three generations of people “ said Ron Gottsegen. He then invited Neela Penumarthy, one of the young devotees, who met Amma on her first visit as an infant 30 years ago,to share a few words.

Speaking on behalf of those who have grown up with Amma, Neela shared, “This year marks the 30th anniversary of Amma’s visit to the Bay Area. Her visits here, while filled with sacred sweetness, only comprise a small part of her gift to us. In many ways, the San Ramon Ashram is an extension of her presence, and has been the source of great joy and community for so many. Many of us have learned to crawl and walk on these very grounds, and this space feels like our truest home.

“Amma’s dream for humanity is a simple one: That people will be able to eat to their fill. That there will be a day without violence. That individuals will be able to sleep without fear. And for her children to serve the poor and needy.

“Regardless of when we met Amma, in honor of Amma’s presence here, we can recommit to instilling even our most mundane interactions with this spirit of compassion, Amma’s very spirit. We can reach out to those who are suffering, be a kind presence of others, and reduce our own violent tendencies. Just as Amma sees all of creation as her own, we can see the world as our family.

“We feel profound gratitude to be the beneficiaries of the gift of your presence, Amma. You have said many times that your children are your wealth, and we will strive to make your dream—of a loving, more compassionate world—a reality. In this spirit, your children have written messages of appreciation and personal pledges to You, which have been strung into a literal garland of gratitude.

We sincerely pray that our words and deeds will become an expression of our love for you.” 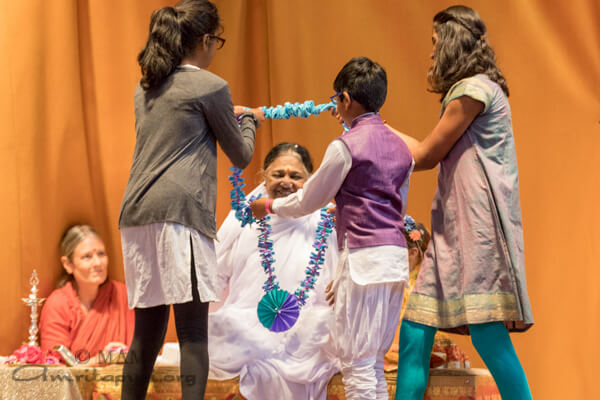 This garland of gratitude was then presented to Amma, who bowed as she received it.

Then, a procession of devotees who met Amma on that first visit to the United States in 1987 offered flower petals as a token of their appreciation, and on behalf of all the assembled crowd, to Amma. They also brought two saplings to Amma to be blessed, invoking Amma’s own words, “May the tree of our life be firmly rooted in the soil of love. May good deeds be the leaves on that tree. May words of kindness form its flowers, and may peace be its fruit. Let us grow and unfold as one family united in love.” 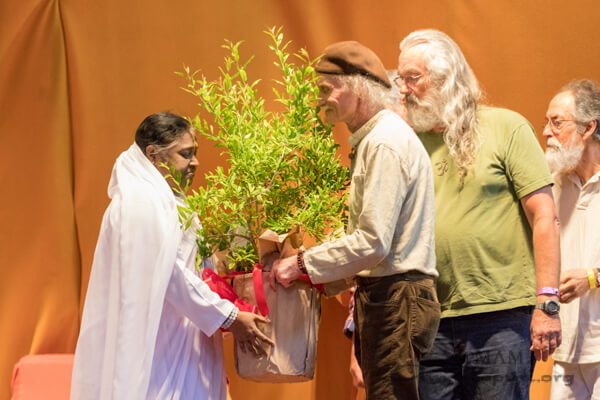 As the trees were presented to Amma, Ron remarked, “In honor of this milestone, we offer two saplings, a fig and Pomegranate, to Amma on this occasion. These trees will be planted here at Amma’s first Center in North America to commemorate 30 years of countless blessings the devotees have received from Amma, with a prayer that these trees root deeply and remind us always of the cool shade and comfort of Amma’s loving embrace.”

Taking the microphone, Swamiji asked the assembled crowd to honor both Kusuma, who had organized the first tour all those many years ago and laid the groundwork for all that came after, and MA Center Board President Ron Gottsegen, who donated the first ashram in the United States to MA Center, making possible what has become a sanctuary and true spiritual home for three generations of spiritual seekers. As Amma took Kusuma and Ron into her arms, the crowd roared with appreciation and gratitude.