It was Tuesday in the ashram, a quiet day reserved for the practice of sadhana. Amma had come out to meditate with the devotees and serve prasad. She asked if anyone had a question. One devotee raised their hand and asked a question regarding their father who was terminally ill, “When a patient is dying in the hospital, should we give them morphine to alleviate their pain or not? You have said before that our final thought at the moment of death will determine our next incarnation. Will giving a person morphine affect their final thought?” 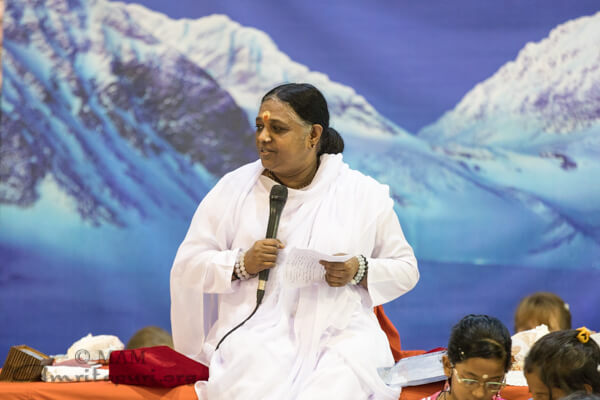 What Determines Our Final Thought
Amma replied: “If there is pain for your father, and the doctors suggest giving him morphine, better to administer the morphine as the doctors suggest. If he is conscious, let him die peacefully, without pain, so that he may remember the Lord, that is better.
“If the patient is in pain, administering morphine is the better option. The last thought will come according to the habits we have cultivated.”

“The next life will be according to the last thought we have. Whatever we are attached to, that will be the final thought. Wife, children, grandchild, whatever you are attached to, that is what you will think about. Action becomes habit, and habit determines our character–and this is eating us up. Whatever we have habituated is what we will become.”

Amma then gave the example of wearing a watch on your left hand for twenty years, then, one day, switching it to the right hand. At first, when you go to look at the time, you will still look at the left, despite the watch being on the right. Similarly, if you have been keeping a car key in the drawer for many years, and one day you decide it is better to keep it in your pocket, when you go to look for it, you will first search the drawer.

Amma continued: “Action has determined our character, and we need conscious effort from our side to bring awareness of that back. Our last thought will be determined by our vasanas.

Different perspectives and attitudes
“There was an interview with a survivor of the 9/11 terrorist attacks. The interviewer asked him, ‘What were you thinking about when you thought you were going to die?’ He replied that he was thinking about how the terror attack would bring down the vaule of the dollar, and so, he was considering the different countries and banks he could transfer his money to!
“When there is a car accident and somebody dies on the road, his family memebers may be standing around and crying, but someone else, seeing the crowd, might come to sell lemonade, thinking of it is an opportunity to make a profit. Everybody has different perspectives and attitudes. Even on the death bed, our last thought will be according to our vasanas.”

Habits and the Unconscious
Amma then proceeded to discuss how habits are retained in the unconscious.
“Amma knows a lady who died, and she was chanting a mantra. Even though she was unconscious, her lips were moving.
“Similarly, my father’s mother used to tie malas for the temple everyday for so many years. Even when she was very old and became unconscious, you could still see her fingers making the same motions with the corner of her sari that she used to make when tying the malas.
“Action becomes habit, and habit becomes character. Sometimes, it may not manifest outwardly, but it will be there within.”

The Story of Ajamila
Amma then narrated the story from the Bhagavatam where Ajamila gets moksha by calling out to his son, Narayana, while on his death bed. Despite having intended to call his son, the last word on his lips was the name of the Lord, which resulted in his liberation.
Having heard the story of Ajamila, a man believed getting liberation was as simple as this. Thus, he decided to name all his children different names of the Lord. On his deathbed he called his sons: Krishna, Govinda, Murare, and Narayana. All four quickly came to his side. Seeing them all there, the father became very angry, saying, “Wait, if you are all here, then who is taking care of the shop?!” and then he died.
Amma then discussed the two stories.
“The difference between Ajamila and this man might be that Ajamila chanted mantras in a previous life. Just by chanting the name of the Lord, you may reach God. Perhaps that is the moral of the story. Either way, we have to work very hard, continuously.”

Karinal, the black day
“Life is a cycle of birth and death. When we surrender, we escape the cycle. Some people may not believe in reincarnation. Some say, ‘Everything Atman, in which case, what is born and what is dying?’ There are people arguing like this. According to Amma’s experience, she cannot accept this type of argument. Amma has seen that when a person dies on a Karinal (astrological ‘black day’), three, four, or five more deaths follow in the family.” 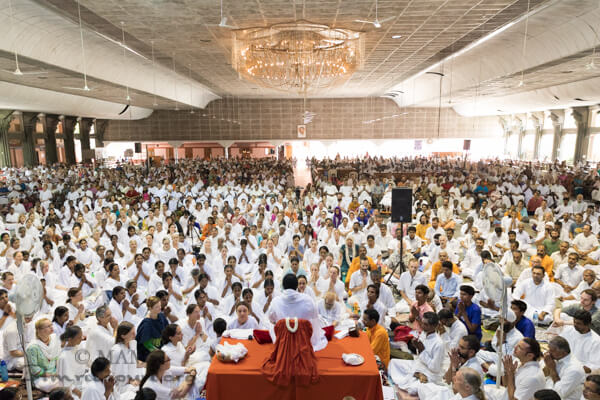 Amma then cited the example of a recent death at the ashram on a Karinal. After this one death, several others followed shortly thereafter. Though all those who died had been undergoing treatment for their illnesses for several years, each died within a short time of this first death.
Amma continued, “The ashram is also a big family, but here we have the acceptance that you are born one day and you will die one day. The flower blooms but also wilts and falls off. Here we have the mind to accept this, so we don’t worry about it as much. We chant mantras, we chant The Bhagavad Gita, we sing bhajans, and we turn the funeral into a celebration.”
Having finished her response, Amma prepared to serve the prasad. The devotees arranged all the food, and the plates began to disperse through the crowd after moving through Amma’s hands. The sense of importance in action, habit, and character was tangible, as all waited to join in the meal.