Amma came for an evening meditation in the bhajans hall with all the visitors and residents of the ashram. Though most people were sitting in meditation even before Amma arrived, the effect of her presence was unmistakable once she sat down, crossed her legs, and closed her eyes. The entire hall filled with a tangible quietude that allowed the devotees to dive deep within themselves.

After the meditation, Amma asked if anyone had a question. A man raised his hand, “Amma I have heard that realized masters perform some karma in order to keep their body. What do you do to keep this body?” 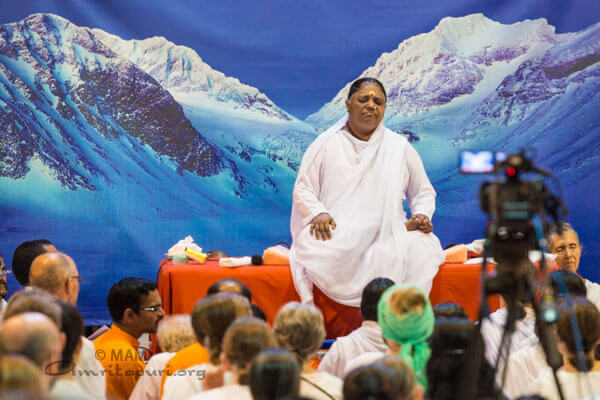 Amma responded:
“Self-realization and the body have no connection. To know the Self means to see others as your own Self, others’ joy as your own joy, others’ sorrow as your own sorrow. When your finger pokes your eye, you console both the finger and the eye, that will be his attitude.

“Pardon the mistake and love everybody, that is the realization. Experiencing others’ pain and joy as your own, forgiving with love and compassion, that is the state of realization. Like the mirror, which reflects without attachment, you experience others’ emotions without becoming attached to them. No one is different from you, like a thousand pots reflecting the sun–there is only one sun despite the many reflections.

Body and Mind
After having explained the state of realization, Amma began to discuss the distinction between body and mind, “To maintain the body you need to eat food, like others, but a realized master’s mind is different. In regards to food, mahatmas can live like a python, eating only once or twice a week. When in the body, food is necessary, but the matter of their diet is not of importance. The mind is what is important to consider. Like a porter and a scientist, one uses the head to carry luggage, the other uses it to discover new natural truths. Like that, someone who is realized, despite having the same anatomy as others, uses their mind differently.”

The Spiritual Mind and the Mundane Mind
Amma then proceeded with some examples to explain the difference between the mind of spiritual seeker and the mind of the common man, “The common man is like a simple 10 or 20 watt bulb, but the spiritual seeker is like a transformer. When the mind is scattered it loses its power. Just as a river has many trickling streams, if you divert them all into one, then it has the power and force to generate energy. Like a lens focused in the sunlight, it has the power to burn. The difference between the common man and the spiritual seeker is the degree of focus in their mind.

“Similarly, if we consider different samples of water of varying temperatures, we can understand that boiled water is purified of all germs, while lesser temperatures of water may contain differing amounts of impurities in them. As well, there is salt water, fresh water, and filtered watered. They are all instances of water, yet their quality is what makes them different.”

Making the Most of a Mahatma’s Presence
Amma then discussed how we can make the most of a mahatma’s presence, “We should enjoy the presence of a mahatma by developing an attitude of patience. A mahatma’s touch, thought, and glance are capable of benefiting the entire world–like the chicken hatching the egg with its touch, or the fish hatching the egg by keeping a watchful eye on it, or the tortise hatching the egg by laying it in the sand and keeping the thought of its nest in its mind. The mahatma is like that, benefiting the world with their touch, glance, and thought. We should make a mahatma happy with our actions and attitude, which should be selfless and humble.”

Then Amma explained the benefit of a mahatma’s presence. “Mahatmas are like a river, they flow without effort or cessation. If you dig a pit on the bank, the water of the river will flow into it. By becoming humble, the mahatmas will flow towards us and fill us with their grace. To enjoy the presence of a mahatma, we should open our heart, only then can we enjoy the presence of the mahatma.” 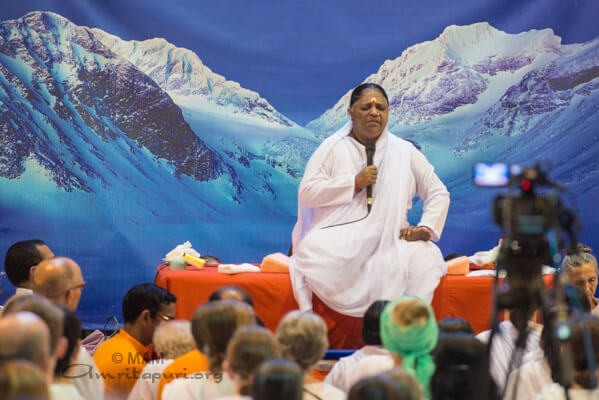 The Actions and Body of the Mahatma
Afterwards, she discussed the relation between a mahatma and their physical body, “For the mahatma everything is Brahman. Like flower that withers away, the body will inevitably fall off one day. The mahatma has no attachment to the body. In fact, there is nothing to lose, nothing to discard. It is like the sun, even though we see the sunrise and the sun set, really the sun never sets or rises, it is always shining. The Atma is like this. The Atma is changeless. Like the iron filings moving in the presence of the magnet, the Atma is the magnet, it does not move, though the body of the mahatma might move. All the actions of a mahatma are for the sake of the world.

“The mahatma is like the dry peanut or dry coconut, it is not attached to its shell, which, for the mahatma, is the body. Anytime they want, they can discard the body like a snake discards its skin, but they maintain the body for the sake of the world. All their actions are for the sake of Dharma alone.

“Presently, people enjoy arguing about the philosophy of vedanta, but they do not wish to live it” Amma concluded.

The devotees were awed with Amma’s satsang, which was a rare glimpse into the inner-workings of her own self.

The sun was setting over the hall and the evening bhajans were soon to begin. With a quiet, meditative mind, everyone contemplated Amma’s words. The mere thought of the mahatma’s profound state of detachment and selflessness was enough to fill each person with reverence and hope. It was clear to all that such self-realized beings are not only a boon to the whole of humanity, but also a profound catalyst of change for those who share in the bliss of their company.