“On Holi, you can fearlessly and lovingly smear colours on anyone—be it your parents, elders, neighbours, strangers, foreigners, friend or foe. Whoever you are, whatever your status or position may be, this act of “colouring” is accepted in a spirit of celebration and friendship. There are no hurt feelings or attempts to defend one’s self. In today’s world, where human beings and nature are besieged by problems, threats and conflict, celebrations such as Holi bring the much-needed message of equality, unity, unconditional love, happiness, compassion, universal friendship and enthusiasm.” said Amma in her Holi message earlier. And this is what exactly happened in Amritapuri today. 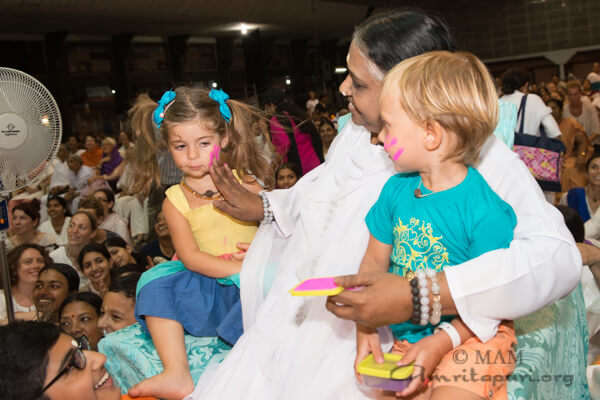 After the evening bhajans, Amma came to the main hall, sat in the middle, smeared some colours on the face of some kids around her while watching cultural programs. She also sang few bhajans on Holi. Many were dancing to the tune of bhajans. Then She broke the pot of butter and milk, took Pichkari and sprayed water, threw colour powders all around. The hall erupted in joy and celebration. Colours all around, spraying and smearing on each body they find, mind became one in Love. 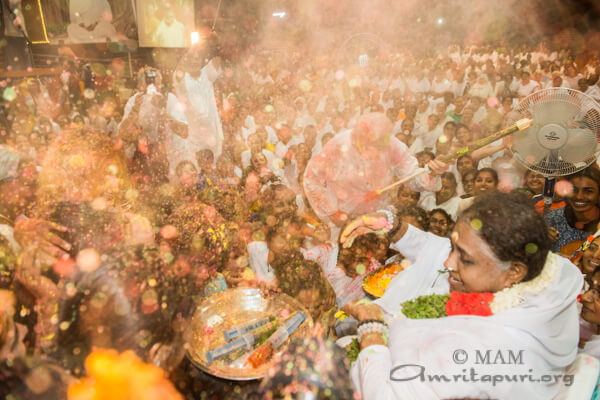 Happy Holi to all of Amma’s children from Amritapuri.