Amma held her first-ever program in the city of Salem, Tamil Nadu on February 4, 2017. The program was held at the ​Sona College ground. 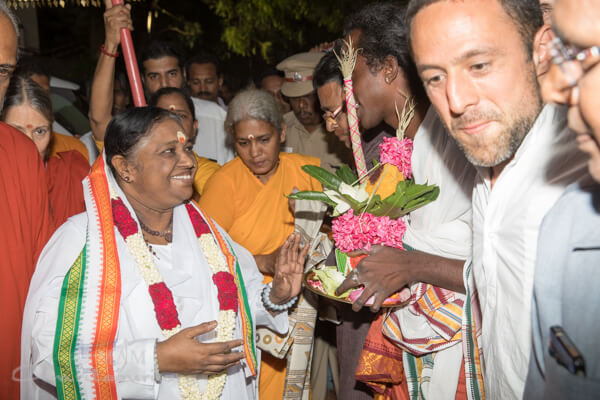 Many educationalists shared the dais with Amma. In their remarks, they universally expressed a desire to collaborate With Amrita University in both fields of education stressed by Amma: education for living and education for life.

Many students were also on hand for the program, happily lending their hands and smiles to help receive the massive crowd that came to receive Amma’s blessings.

As part of the program, Amma gave new saris to each member of the local Amrita Sree self-help group. She delighted the local devotees with her use of Tamil, conducting the guided meditation and worship (manasa puja) in Tamil, and singing many new bhajans in Tamil, several of which had been composed for the tour. 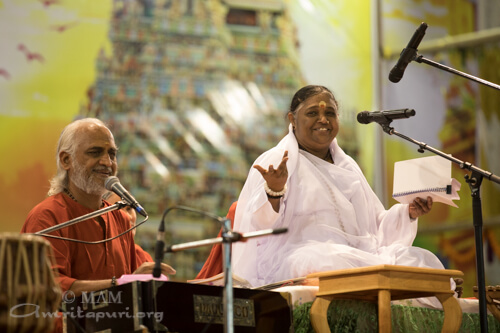 Addressing the gathering, Amma said: “Most people only have one mantra: ‘I… I… I…’ When people perform actions with only the end-result in mind, they will not hesitate to do anything to attain that end—even commit crimes. Such a self-serving perspective makes people consider everyone else as enemies. In the throes of blind competition to keep everything under their control, humanity’s efforts become insincere and incomplete. It is only when joy and sharing come into our actions that they become complete. One should be made aware of the oneness of all beings in creation.”

Among the many cultural programs staged during Amma’s darshan, a stand-out was the
Krishna Vrndavan Kolattam dance. The concept of this traditional dance is that all the gopis (cowherd maids) are dancing with Krishna. But in this rendition, all were men as gopis. Three generations participated in this dance, the youngest being teenagers. For each tune and rhythm they took different steps. This traditional dance is customarily performed only in temples – but here, it was performed in the traveling temple of Amma’s love – that is erected wherever Amma goes, and is left behind in the hearts of all those who pass through her arms. 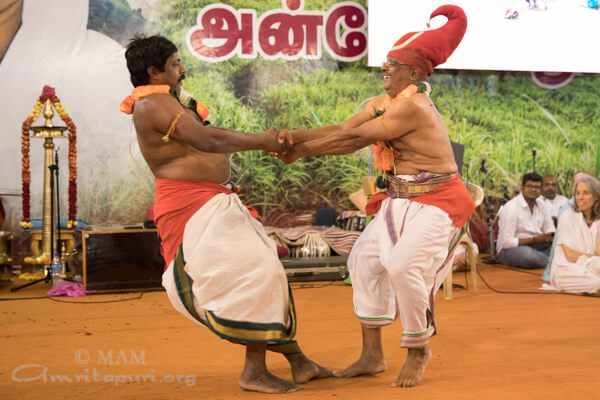 Amma finished darshan only the next morning at 10:30 am. As she left the stage, hundreds of people people were still streaming onto the college grounds, having heard that Amma was in the area. Amma had to leave for the following program, but stayed back to make sure that everyone who had come to see her received her prasad and was able to spend a few moments in her presence.