Thousands of people filled the main hall in Amritapuri to welcome 2016 in the presence of our Divine Mother.

As darshan was finishing, a number of cultural performances entertained the gathered crowd who had come from all parts of India and the world. There were traditional Indian dances followed by a rap session praising Amma. A dozen or so young resident children danced to the Baduga dance bringing joy to all.

Darshan finished, and as midnight approached, Amma returned to the stage and led everyone in chanting Lokah Samastha Sukino Bhavantu.

In her New Year’s address, Amma acknowledged the many tragic natural and man-made events of the past year and praised the response to the recent flooding in Chennai. She stressed the importance of caring for Mother Nature, giving examples of how we can all make an effort to help. Amma then expressed her hope and prayers for the success of efforts to solve global climate change as put forth during the United Nations Climate Change Conference in Paris this past November.

After her speech {news}, Amma sang “Kushiyom Ki Bahar” followed by “Bandalo Bandalo”. The contrast of the melancholy, yet hopeful tune of Kuishiyom Ki against the hand-clapping and uplifting melody of Bandalo gave hope and joy for the New Year.

Amma then stood up, and her peetham was moved back to make way as she danced to the traditional Baduga song. As she gracefully moved in time to the rhythmic beats, she playfully encouraged all to join in. A few devotees on stage joyfully started dancing, and Amma even tried to get a few small toddlers to participate. Everyone clapped their hands and danced in bliss.

As the music and dancing came to an end, payasam was distributed to everyone – with Amma herself pouring each glass. After enjoying the sweet prasad, Amma returned to her room, and everyone went to bed with a smile on their face. 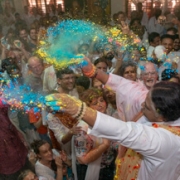 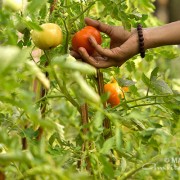 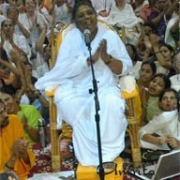 Start working to realise your dreams

Be Joyful, Alert, Smiling and Compassionate
Scroll to top