At the beginning of the evening program, Michigan State Senator Gilda Jacobs honored Amma with a citation that was read aloud: “Let it be known, that it is a pleasure, indeed, to honor Mata Amritanandamayi Devi, known worldwide as Amma, for her service and dedication to humanity. 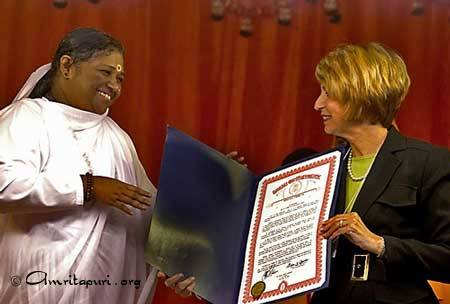 Presenting the honor, she continued reading, “For one week in November of 2005, Michigan will have the distinct privilege of adopting Amma as one of its own. Thousands of people will flock to Ann Arbor to meet and spend time with this tireless advocate of peace, unity and understanding.

“Amma’s community efforts have impacted the lives of millions of people. Her sacrifice and service have opened the hearts and calmed the minds, inspiring others to serve selflessly in their communities,” Ms. Jacobs quoted from the citation.

“In 2003, the Boston Globe said this of Amma: ‘A Hindu, she does not attempt to convert people of other religions. There are Jews, Christians, Hindus, Buddhists and atheists in her crowds. If she has a dogma, it is simple: Love and serve one another.'”

Ms Jacobs further read, “Indeed, Amma’s contributions to charity seem to be without limit. In Michigan, she has been involved in Mother’s Kitchen, providing meals to the homeless; Circle of Love, a network providing assistance to the sick and disabled; Arbor Hospice; Freedom House; Habitat for Humanity and more.”

Upon finishing, Ms. Jacobs said, “In special tribute, therefore, this document is signed and dedicated to offer praise and appreciation to Mata Amritanandamayi Devi. May she know of our highest esteem for her contributions to a better world.” The citation was signed by the Governor of Michigan, Ms. Jennifer Granholm.