On the shores of the Mediterranean, a sea of humanity gathered at the Mar Bella Sports Centre in Barcelona over the past three days.  The crowds were so large that each day the morning darshan lasted until 5pm and then when Amma would return just 2 hours later for the evening programs, she would again sit until 4 or 5 in the morning. 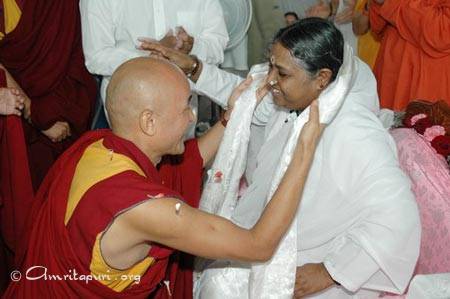 On the first night of the programs, Amma was officially welcomed to Spain by the Honorable Indian Ambassador, Smt. Suryakanthi Tripathi.  The ambassador flew in from Madrid, the Spanish capital, for the occasion and was overwhelmed by the crowd that had come to attend Amma’s program. 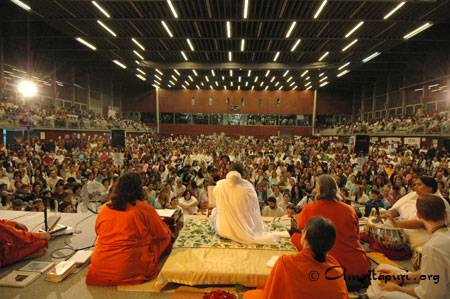 After the official welcome by the ambassador, a young American ashramite that used to live in Spain spoke to the more than 5000 people gathered in the hall.  He reminded everyone that 2 years ago Amma made a quick but memorable visit to Barcelona to give the Keynote Address at The Parliament of the World’s Religions which in fact took place just down the beach from the darshan hall.

The ashramite explained that even though Amma was in Barcelona for less than 24 hours to attend the Parliament, she was able to leave such a lasting memory with thousands of people in attendance because of how much she was able to offer her children in such a short time; by not only speaking, but by also giving darshan and serving food to all those in attendance. 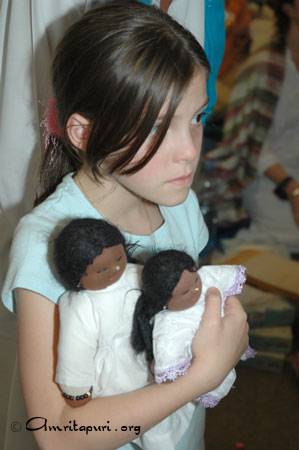 Each day because the evening darshan stretched into the wee hours of the morning, several groups of local devotees had the chance to perform for Amma.  Most of them were of the traditional bhajan variety, but there were a few that were quite eclectic.  Devotees shared their unique musical talents, that included ‘throat singing’ and playing such instruments as a nose flute, saw, didgeridoo, etc.  One such group wanted to find a quiet place to warm up before taking the stage to perform for Amma and ended up in the kitchen tent.  What started out as a improvisational tune up, turned into a lively dance party as all the kitchen sevaites started to move their feet and prepare the food to the beat of the music.

On the final morning of Amma’s visit to Barcelona, a delegation of Tibetan Lamas from, ‘Casa del Tibet’ came for darshan. One of them offered these words: “In today’s world in which we are living, we need to have a closer communication between all philosophies and religions.  We have to come together more and unite.  This is what is missing in the modern world…I am hoping and wishing for a long life for Amma and that she continues doing her work to bring about peace and happiness in this world…We want to thank you for all this work you are doing.”