[Just before Amma left for Europe, a reporter from Matrubhumi, a leading Malayalam daily, asked Amma about Her vidyaarambham [initiation into learning], i.e. when and how Amma was initiated into learning.] 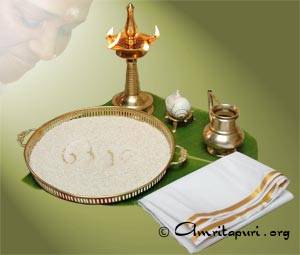 “My vidyaarambham (news) took place 48 years ago. I was four then. Every navaratri, we used to place the items for worship in the Kunnumpura Veedu, a house near ours. It was my mother, Damayanti Amma, who took me to there for the vidyaarambham ceremony.

“The person who initiated me into learning was an 85-year-old aashan [teacher]. He took my index finger and made me write ‘Hari Sri‘** on the cow-dung-paved floor on which sand had been spread out. Later, I was sent to the aashaan pallikkootam*.

Q: Which is Amma’s most memorable experience?

“Since the ashram started, we have been observing Vijayadashami and Vidyaarambham here. There were years when up to 500 children were initiated into learning here. But for the last many years, I have been overseas during Navaraatri. This year too, I won’t be here.

“Even though Amma may have initiated many children into learning, an unforgettable case was that of a girl named Lakshmi. Lakshmi’s only near and dear ones were her mother and younger brother; her father had abandoned them somewhere in Tamil Nadu. Once, when these young children were starving, they went to a restaurant and begged for some food, the proprietor of the hotel threw some hot water on them. The mother, who was proud, took the children to the beach. She flung her young son into the sea. Then, grabbing her daughter, she went near a railway track. When the train approached, the mother jumped before the train. Someone took the orphaned Lakshmi to the Parippally ashram.

“While she was still a young kid, Lakshmi came to see me one Onam. I asked her if she knew the alphabets. She said that she didn’t. While giving darshan, I instructed someone to bring a slate for Lakshmi. I wrote ‘A.’ seeing this, Lakshmi followed suit. Thus, amidst darshan, I taught her every one of the alphabets. Later, I also gave Lakshmi a job at the Parippally ashram. When she came of age, I myself took the initiative to get her married off.” (Read Lakshmi’s Marriage)

**Initiation into the world of alphabets usually begins with the writing of the mantra   ‘Om hari sri ganapataye namah.’  ‘Hari’ refers to the Lord, ‘sri,’ to prosperity. At first, the mantra would be written on sand or in a tray of rice grains. Then, the master would write the mantra on the child’s tongue with gold. Writing on sand denotes practice. Writing on grains denotes the acquisition of knowledge, which leads to prosperity. Writing on the tongue with gold invokes the grace of the Goddess of Learning, by which one attains the wealth of true knowledge.