Switzerland is a unique European country in that within its borders four languages are spoken: German, French, Italian and Rumanch. Despite the diverse languages, the people are very much unified in their “Swiss-tvam.” They take pride in precision and in doing things well—there is a reason why the country is known throughout the world for its clocks! As such, the hall where Amma gave darshan—the Eulachallen in Winterthur (a region about 20 kilometers from Zurich’s city centre)—had a strict curfew. The first two nights, Amma’s darshan had to finish by 2:00 a.m. sharp.

The first night, around 1:00 a.m., someone came to Amma to remind her about the pending curfew. As she gave darshan, Amma responded, “Normally, Amma has an understanding with Time: ‘You mind your business and Amma will mind hers!’ and we don’t bother each other. But tonight, it looks the clock is going to have the final word!” Of course, Amma and everyone around her broke into laughter.

Amma had many beautiful things to say during the programmes. When one Swiss man came for darshan, he asked Amma how she is able to embrace people with skin diseases such as leprosy without ever becoming infected by their maladies. Amma answered with a question of her own, “Can the Ganges ever become impure?”

To the delight of the Swiss Germans, Amma sang a couple bhajans in German, including “Wo Kann Ich Hin?”  [a German version of “Where Can I Go?”]. On Devi Bhava, a group of devotees sang some all-vocal choir music in the Rumanch language as well.

And one afternoon, the Swiss children’s satsang—a group that meets regularly to inculcate Amma’s teachings in children—put on a play for Amma, complete with live music. The play focused on Amma’s childhood and all the special relationships she had with various animals: the cow that would lift its leg so that Amma could drink milk directly from its utter when she was meditating, the dog that would bring food packets for Amma…. The children even showed how the snakes would come to simply be near Amma when she was in meditation.

With its four different languages under “one roof,” as it were, Switzerland is a beautiful representation of unity in diversity—a microcosm of all of Europe, the perfect beginning for Amma’s European Tour. 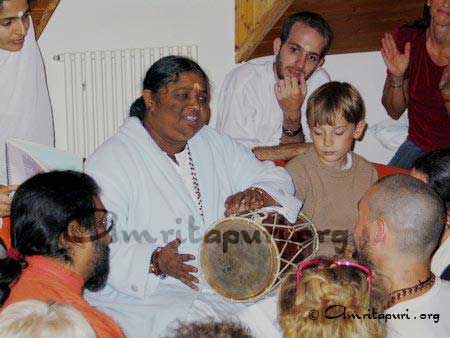 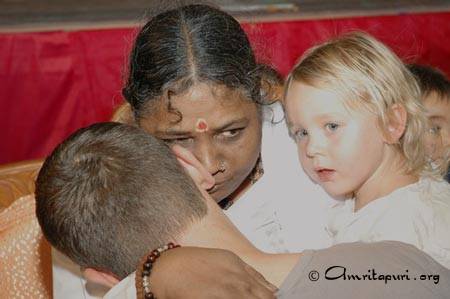