Someone had put a note on Amma’s peetham before the start of the evening bhajan, requesting Her to sing the Mahishasura Mardini Stotram, a 21-versed hymn in praise of Durga. Amma read the note aloud to the ashramites and devotees who were seated before Her and then told them all to close their eyes, imagine that they were dancing with Amma and lose themselves in the song. 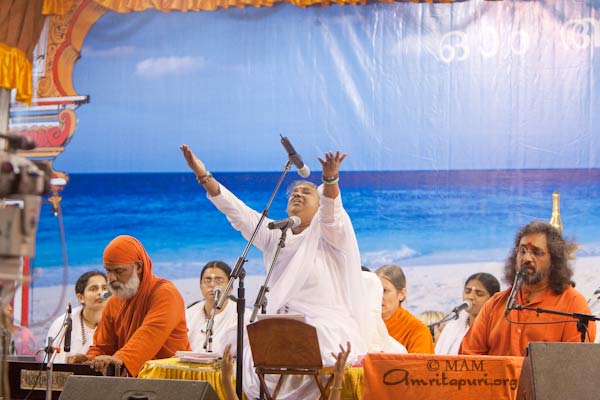 And that is exactly what they did, as for the next 15 minutes, the bhajan hall resounded with the fast-paced, hypnotic hymn that Amma has only sung a few times before. The lyrics say that Durga “burns like the blazing sun, inflamed by the resounding din of the drums of the gods,” and indeed that is what the song sounded like when Amma sang it.

The Sanskrit stotram, which is often attributed to Sri Adi Shankaracharya, details Durga’s slaughter of Mahisha Asura, the Buffalo Demon, who, according to the Devi Mahatmyam, persecuted even the gods during his reign of terror.

Mahisha means “buffalo,” and is thus a symbol of tamas, the element of creation associated with darkness, lethargy and ignorance. Mahisha Asura should be taken as the demonic tendencies born of ego that reside in every one of us—hatred, jealousy, lust, greed, etc.

In the end, Durga is of course, victorious, earning the title that is thrust upon Her every fourth line: jaya jaya he mahisha-asura-mardhini ramya-kapardini shailasute. “Victory, victory to You, Oh Slayer of the Buffalo Demon! Victory, Daughter of the Himalayas, with beautifully braided hair.”

The ashramites have been singing the stotram as part of their morning archana, along with the 108 names of Amma and the 1,000 names of the Devi.