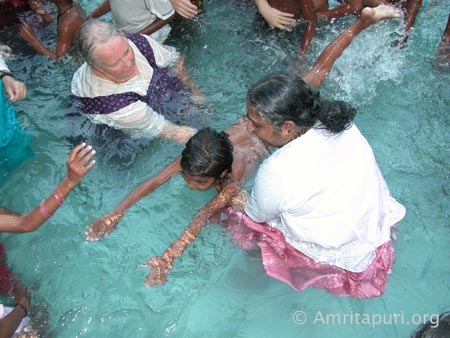 The 30 children from Alappad who are currently taking swimming lessons in the Ashram swimming pool came to Amma with a desire: Would Amma go swimming with them?

Word got around pretty quick. Soon everywhere one went one would people talking in hushed yet excited tones: Did you hear? Amma might go swimming with the village children today!

Around 4:30, when Amma finished giving darshan and walked down the spiral steps, about 50 village kids were there, lined up and waiting for Her. “Amma, will you come with us?” one of them asked.

Amma seemed to think a minute and then said, “Go take a bath, go to the bathroom and change your clothes. Then Amma will come.”

Their response was unexpected: “No, Amma. Please eat something first and then you can come.”

About a half hour later Amma arrived at the pool, wearing a pink swim dress. The kids—along with the instructors who are teaching them to swim as part of the Ashram’s tsunami-relief efforts —were already there in the shallow end of the pool.

When Amma stepped down into the water, to be frank, the kids simply went wild. The pool exploded with screams, splashes and the general mayhem associated with a large group of children in a body of water. It certainly was hard to believe that only a week before some of these kids were afraid to even put a foot in the water.

Amma spent the next hour or so helping various children to swim around the pool. Often She would offer slight support to their bodies as they propelled themselves forward with kicks and strokes. Amma also would have the smaller children hold on to Her back as She swam back and forth, from place to place. She taught them how to hold their nose as they went under and showed them how there was no need to wipe their face each time they lifted their heads from the water.

As Amma swam about with the children, one could not help but think of something She says in nearly every one of Her satsangs: “For one who knows swimming, being in the ocean is a delightful game. But one who doesn’t know may even drown.” 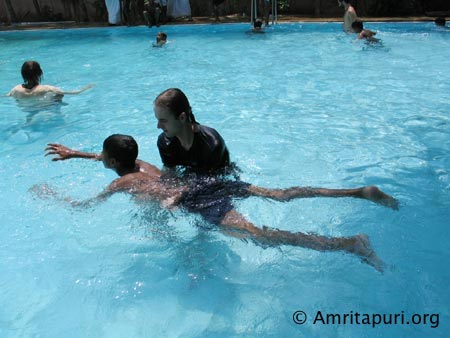 What was Amma doing there in the pool? Teaching children to swim or sewing the seeds of a relationship that would serve them in the years to come. Was this about making them masters of water or masters of life itself? Or in Amma’s unique way, was it both?

Afterwards, in front of Amma’s room, Amma served all of the children chai and vadas. They thanked Her for coming and swimming with them, telling Her that they loved Her. They then asked Amma to bless them, as they were about to take their final exams.

“Amma has only studied up to fourth standard,” Amma told them.