One should be able to see all of creation as one, the unity beyond the apparent diversity. Amma advises us to practice that attitude in our day to day life, and we could get a glimpse of it by seeing the IVUSA Japanese students working on the Amrita kuteeram site of Raichur, Karnataka. For one who is not familiar with Japanese culture, it is really surprising to observe the group-oriented mind, the absence of self-centered attitude and the enthusiasm these students have. 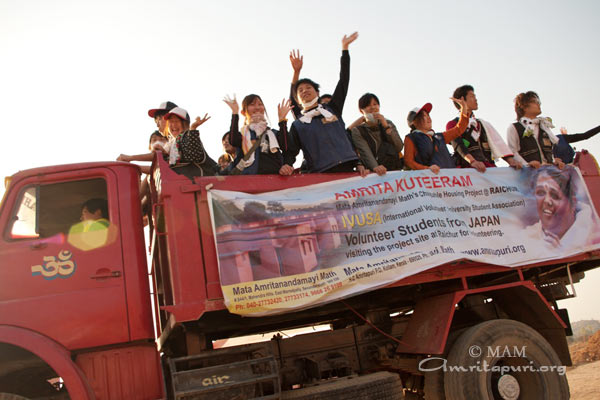 Seeing these 78 students (40 girls and 38 boys) acting as one, helping each other, responding all together with the same voice, one is reminded of the different cells of the same organism, and of course, of Amma’s teachings about selflessness and unity beyond diversity.

The IVUSA (International Volunteers University Student Association) group came to Raichur from 14 different universities from all over Japan, via Delhi and Hyderabad, arriving on the evening of Shivaratri. IVUSA has participated in Amma’s charitable activities over the last 14 years, including: the Gujarat earthquake housing project, a slum redevelopment project in Pune, tsunami relief work in Nagapattinam and Cochin, flood relief work in Raichur, etc.

The group was given a warm welcome by local villagers with garlands and a drum band. Shortly after arriving they were asked whether they are willing to walk to the Shivaratri program at the local Shiva temple, some 3 KMs away. Despite such a long exhausting trip, all enthusiastically expressed their desire to participate.
The temple was located on top of a rocky hill, providing an aerial view of the surrounding area: rice paddies, cotton and sugar cane fields, the Krishna river quietly flowing through the plains, and at the base of the hill, the two housing sites of the Raichur Amrita kuteeram project with a total of 717 houses between them. The local villagers led the bhajans while the chorus of Japanese students responded with their own inspired call of “Om Namah Shivaya.”

The next morning, all climbed aboard the truck and tractors for a ride to construction site, which is located 10 kilometres away. The volunteers arrived at the village to wonder struck looks from the villagers and the smiles, giggling and waving from the local children.

The day was mainly dedicated to the construction of a cement roof for the community hall, at a site with 160 Amrita kuteeram houses. After a day of hard work under the scorching sun of the Karnataka plains, everyone went to the Krishna river and had a cooling and refreshing bath, and were given sugar cane to eat from the villagers. 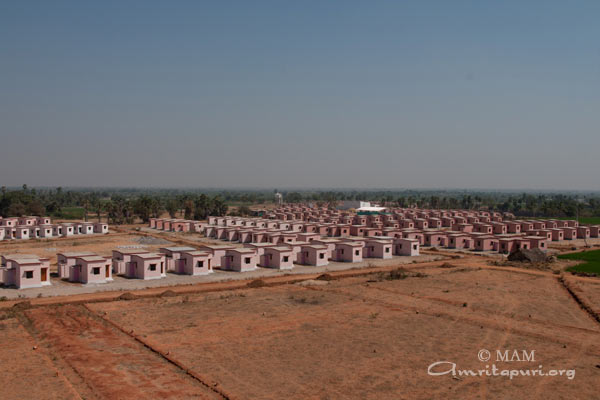 For the remaining few days, the students will focus their efforts on the Dirampur site and will help put the finishing touch on the houses (painting, cleaning, and adding that unique Japanese touch); to get the houses ready to be handed over to the beneficiaries who are now living on an overcrowded and monsoon-flooded island on the Krishna river.

After that, the students will travel to Amritapuri, to experience Amma’s darshan, and then back home, carrying along in their heart life-long memories of their journey in India.