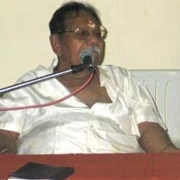 As Amma often laments, the elderly are not valued in today’s world. In fact, they are most often pushed away as a nuisance. In truth, their wealth is in their years, the vast amount of knowledge they have acquired during their long lives—knowledge borne out of their personal experiences and reflections, as well as all they have witnessed. What they’ve lived, the younger generations can learn only through books, often written by those who weren’t even there. Thus, to respect one’s elders is to respect knowledge itself.

Twice this past week, someone who’s witnessed more of Amma’s life than almost anyone else made his way to the bhajan hall to give satsang to the hundreds of ashramites assembled there: Suganandan Acchan, Amma’s father.

Accompanied by his wife, Damayanti Amma, Acchan sat for more than one hour each day, telling story after story—some of which were as many as 45 years old—to his riveted audience. Towards the end of his second satsang, several brahmacharis and brahmacharinis were even asking him questions in hopes of learning of events long past about which they’ve always longed to know.

Even though some of the stories have been recorded in books published by the Ashram, hearing them from Acchan’s perspective always proved fascinating and entertaining. And often, he would reveal details not provided in the books.

For example, many have read the story of Amma’s pilgrimage to Madurai and Kanyakumari in the early 1980s. The tales of Her visiting the Meenakshi Temple and visiting the avadhutas Mayi-Amma and Nayanar Swami are well known. But how they came to life coming from Acchan’s mouth!

The avadhut Nayanar Swami lived in a small village in Tamil Nadu on the way to Kanyakumari. Though abiding in his oneness with God, he was like a mad man in his ways—not bathing, urinating in the same place he slept, speaking mainly in a language no one could understand. Acchan told how the group sat in the hut around the swami. Amma sat on the swami’s right and the devotee who had brought them there on his left. Suddenly, the swami grabbed the glasses of the devotee to his left and flung them across the room. He was known to act in unexpected ways—even striking a blow or spitting. Everyone assembled in front of Acchan laughed as he confessed, “I, too, was wearing specks and, not wanting to lose them or receive any beatings, I quietly moved to the back of the hut.”

Similar was Acchan’s telling of the visit to the Meenakshi Temple in Madurai. The temple, which is more than 2,000 years old, sees thousands of pilgrims coming every day to have the darshan of Meenakshi Devi. Thus, there was a large crowd assembled around the stone image of the goddess in the temple. As Acchan recollected, as soon as Amma saw the murti, She entered a divine mood. Her body became stiff like a board. After some time, it began to vibrate intensely. Then, suddenly, Amma began to dance. It created a real stir, and soon many of the pilgrims gathered around. When the pujari in the sanctum sanctorum saw the commotion, Acchan said, he seemed to immediately recognise that the girl was not a regular devotee, but an embodiment of the Divine Mother. He immediately removed one of the garlands from around the Meenakshi murti, came out of the inner temple and placed it around Amma’s neck. The whole scene was almost too much for Acchan, who told everyone that he resolved then and there not to bring Amma to any more temples.

Other stories included those of various attacks on Amma by rationalists in the early days and experiences that helped Acchan to understand that Amma’s body is not at all like an ordinary human one. He also explained why Amma chose the spot in Kodungallor as the ground for the Ashram’s first Brahmasthanam Temple.

To end, Acchan shared with everyone something he had written for Amma, something that he, as the sole one whose fate it is in Amma’s leela to play the role of Her father, has the license to compose—a lullaby.