“Now Why Should I Write?”

When Mahakavi Akkitham Achyuthan Nambootiri received the Mata Amritanandamayi Math’s Amritakeerti Puraskar for his contributions to poetry, philosophy and Vedic culture, his eyes were filled with tears.

“I am standing in the greatest, most auspicious moment of my life,” he said, standing at Amma’s side. “There is no greater recognition than this for me to attain.”

He then quoted a verse from one of his famous poems:

[When I shed one tear drop for others,
a thousand galaxies burst forth in my heart.
When I offer a smile for others,
the eternal pure light of the full moon strolls in my heart.]

“My lines—Amma has accepted. This is the contentment receiving this award gives to me. The goal of human life is moksha. Through accepting my poem and giving me this award, Amma has given me moksha. Now, why should I write?”

It was Kerala’s Honourable Chief Minister, Shri. Oommen Chandy, who handed the award to the renowned Malayalam poet and scholar.

Mahakavi Akkitham, 73, is one of today’s most revered Malayalam writers. He has received numerous awards since his works began to be regularly published in the early 1950s, including a 1973 Kendra Sahitya Academy Award for his poem “Balidarsanam” [“Vision of Bali”] and the Sanjayan Award for his 1952 poem “Irupatham Nottandinte Ithihasam” [“Epic of the 20th Century”]. In literary circles, many consider this work as the starting point of modernism in Malayalam poetry. In all, some 45 collections of his poems, plays and short stories have been published.

For his part, Akkitham considers his translation of the Srimad Bhagavatam as his life’s most valued work. It comprises 14,613 verses, running 2,400 printed pages. Srimad Bhagavatam is the composition of sage Veda Vyasa on the avatars of Lord Vishnu including the life of Sri Krishna.

Akkitham was born and lives in Kumaranallur, Palakkad District, Kerala.

The Math first began presenting the Amritakeerthi Award in 2001 {news}. 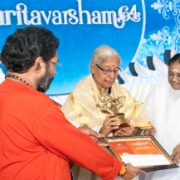 I feel like a squirrel: Lakshmi Kumari on receiving Amrita Keerti 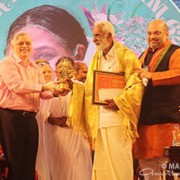 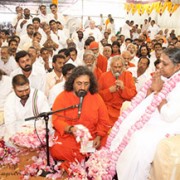 The 55th Birthday Celebrations of Amma 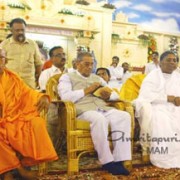 Mata Amritanandamayi Math is an example for the entire world

We have forgotten the language of love and compassion

Restoring the glory of Ayurveda
Scroll to top