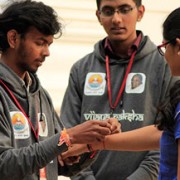 Students of Amrita University are using this year’s Navaratri festival to launch an initiative designed to make respect for women‬ and girls‬ both cool and a matter of personal pride. Named as Vijaya Raksha, started with the blessings of Amma, the campaign aims to bring a social change through a religious festival. It is initiated by the Vedanta Club of Amrita University, Bangalore, India, to bring awareness throughout the country using Navaratri as a platform. Vijaya Raksha is also about educating the next generation and creating awareness in each one of us about the divinity of Motherhood.

The mythology and culture of this land is so intrinsically woven around women that every element of it reflects the divinity and power in her. But, just as a tiger’s beauty is its own enemy, a woman’s treasured characteristics like love, compassion and piety are mistaken as her weaknesses. She is mistaken for the weaker section of the society. The result is what we see today— abuse and oppression of women. We have to change this. We are by her; we are for her.

As the campaign’s founders declared, “People worship the Goddess in the temple for 9 days, but the same people abuse the walking goddesses on the street. We have to change this. This is possible only if we start seeing the goddess in every woman”. They call this the “Respect Women Challenge” and have called on both students and other males nationwide to take the challenge and invite their friends and family to do the same.

Looking at the pictures of Vijayaraksha, Amma, who is on her Europe Yatra, currently in Paris, seeing the students efforts and enthusiasm, commented that “for so long in history it was men who were the breadwinners and protectors and thus it is in their genes to think that they alone are the doers and the protectors, etc. And so a change will not happen overnight. But at least these young men are trying. And women should also acknowledge their efforts and acknowledge that they are genetically predisposed in this way and therefore when they make efforts it should be appreciated.”

You may recollect that during Amma’s sadhana leela, she used to run towards little girls and hug them seeing them as Divine Mother. In her deep anguish of separation from the Divine Mother she would sometimes cry and scream aloud. Eventually they, too, came to understand that she was crying to see Devi. During these uncontrollable outbursts, one of her younger sisters would stand before her, assuming the pose of Devi, wearing a sari and cascading hair. In great joy, she would run to embrace her. If she should notice any girl when she was in this mood, she would run to her enthralled. Embracing and kissing her, she saw only Devi in all.

How to do
A man/boy who pledges to take up the vow of Vijaya Raksha should approach a woman/girl whom they are not familiar with and tie a raksha (a red thread) around her wrist. Do this with an attitude of respect. Then touch her feet and thank her for her contribution to society and her role in protecting humanity. Motherhood is the greatest blessing God has given her. He should acknowledge seeing God in her and should seek her blessings. Respect her Motherhood. He should also make her aware of the reason behind this movement. Do it on all 9 days of Navaratri. 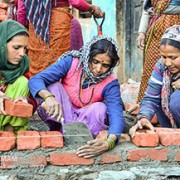 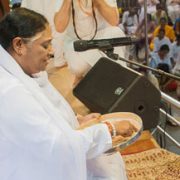 Safeguard enquiry, patience and enthusiasm throughout your life 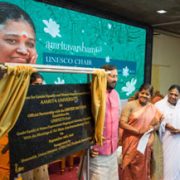 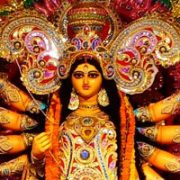 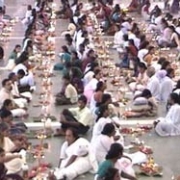 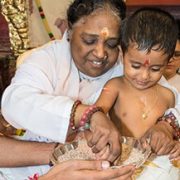 The meaning and importance of Navaratri worship