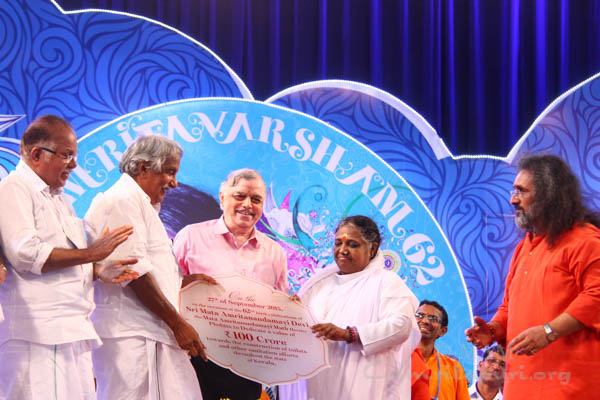 Amma added to her Rs. 100-crore donation to the Namami Gange campaign by making a pledge that MAM will dedicate a value of Rs. 100-crore in toilet construction and other sanitation efforts. A plaque commemorating the pledge was given by Amma to Sri. Ooomen Chandy, Honourable Chief Minister of Kerala during Amritavarsham celebrations.

Oommen Chandy, thanked Amma for her Rs. 100-crore commitment to building toilets and other sanitation projects in Kerala, saying, “Amma has removed the pain of thousands of people. She has contributed Rs. 100 crore to the poorest people—those who cannot even afford a toilet. She is one of the greatest people to ever serve Kerala society.”