The music was prayerful and melodious. It began slowly, invoking the musical Devas. Halfway through the piece, Dr. Subramaniam gave a violin solo, played with passion and devotion. Gradually, the other instruments joined in, creating a heightened intensity, filling the hall with sound. The piece ended with a climactic percussion solo, as if to say “JAI!”

During the piece, a procession of swamis, monks, spiritual leaders, rabbi and dignitaries entered the room. It was a holy sea of orange and white robes, rudraksha beads, sacred ash, and tilaks mixed in with a few business suits.

After the conclusion of the composition, the artists were met with thunderous applause and each was presented with a flower garland.
Next, the audience was blessed with the beautiful voice of Kavitha Krishnamurthi Subramaniam. Her voice rang out, filling the hall with “Hari…Hari….Hari…Om Namah Shivaya.” The audience was captivated with her presence and her voice. During the next bhajan, “Sri Ramachandra,” Amma entered the hall, instantly surrounded by devotees, dignitaries, monks, sannyasis, spiritual leaders and press. She flashed Her famous smile, giving darshan and pranams to the spiritual leaders and monks. She sat for several minutes watching the concert. When Ms. Kavitha was finished, Amma gave her, and each musician a loving embrace. 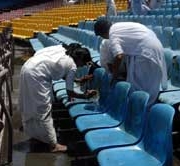 This is not a human wish, this is divine