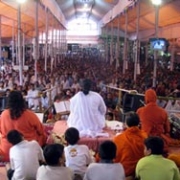 The last Brahmasthanam Festival Amma held in Palakkad [April 2003] was brutally hot, with temperatures regularly hitting 43 degrees Celsius. The heat was so bad, it even prompted Amma to comment in Her satsang, “My children must be suffering — both from the heat outside and the heat inside.” The whole three days of the festival everyone was praying for rain.

This year, their prayers were different. Pre-monsoon rains hit Kerala the day before the festival began and refused to let up until it was over. The Saturn (Shani), Mars  (Chova) and Rahu mass pujas–which are typically done by devotees seated on the ground–had to be performed on chair tops, as the red Palakkad earth had turned to mud.

When Amma came to the stage to lead the Saturn puja on Saturday, She saw a group of about 50 devotees standing out in the rain. She immediately called them to come and sit under the protection of the stage. Thus, as Amma gave Her satsang and sang bhajans that night, She was surrounded by Her Palakkad children.

Despite the weather, thousands of Amma’s devotees attended the three-day festival, which ended around 5:30 Monday morning. 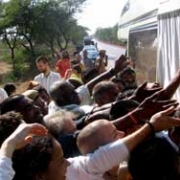 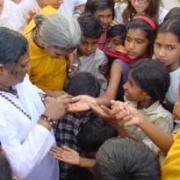 The streets may be their home, but Amma is their Mother 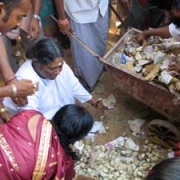 "Only My Mind is Different" 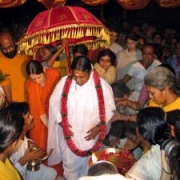 The most heroic thing is caring

One yatra ends, another begins

Love has no specific language

Amma on Scriptures
Scroll to top