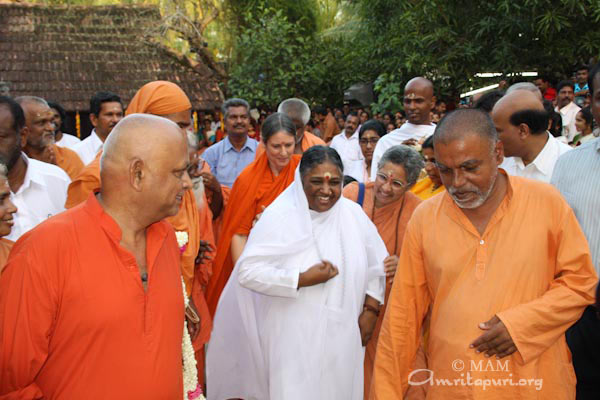 Amma was received with a purnakumbham by the sannyasins of Panmana Ashram, as well as those of other neighboring ashrams, including Swami Prajnananda, Swami Shankarananda, and Swami Kaivalyananda, the resident Vedantacharya of Amritapuri.

Amma was officially welcomed to Panmana by Swami Pranavananda, the ashram’s head sannyasin. Introducing Amma to the public, he thanked Amma for coming and blessing the occasion, he prayed that Amma return every year for the festivities. 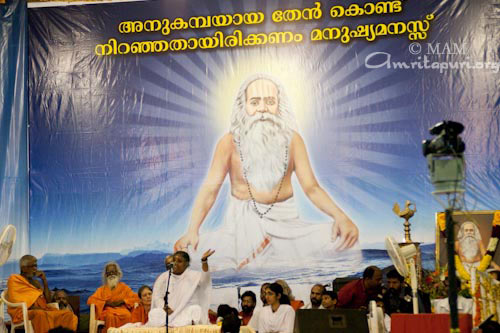 Before her satsang, Amma went to the samadhi mandapam of Chattambi Swami and offered her tributes.

In her satsang, Amma spoke about the necessity of vairagya [dispassion] in order to attain happiness in life. She also praised Chattambi Swami as the embodiment of renunciation, describing how—even though he did not wear ochre robes—he dedicated his life to helping others. “Chattambi Swami was a like a great doctor, helping to relieve Kerala society from immense pain,” Amma said. “During a time when caste and untouchability were at their peak, he proclaimed that the knowledge of the Vedas is everyone’s birthright, and he showed the Vedas themselves to be the authority for this statement. He was a towering temple of dharma and knowledge. He was a jivanmukta and a great pundit, whose voice ushered in a cultural renaissance in Kerala.”