It is natural to feel a bit reserved among strangers or in big crowds. And when you are in an ashram, you would imagine that you would have to behave with a certain decorum. But when the Guru Herself tells you to drop your shyness and embarrassment, stand up and dance… well, even if at first it is only from obedience, you try.

That’s what happened on Onam this year. 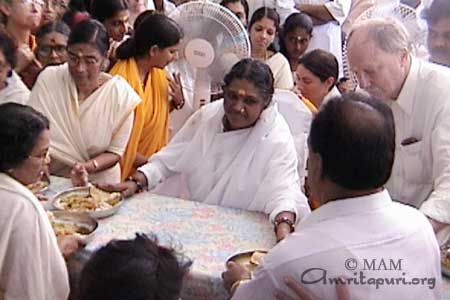 Amma had finished Her satsang, and everyone was expecting Her to begin giving darshan. That’s the normal pattern for this yearly festival: She gives darshan until lunchtime, and then stops so that She can feed Her children. They approach Her by the thousands, and She gives each and every one their Onam day prasad.

But you could tell something was different this year when Mother leaned over to whisper to the Swami sitting next to Her, and his face broke into a big smile. It was after that that She looked out at the sea of upturned faces, and encouraged the four or five thousand people gathered there to stand up and dance.

To dance with Her. Indeed, Amma is not one who simply tells us what to do. She shows us. So there was nothing surprising when, last Friday morning, She Herself took up Her hand bells and started dancing. 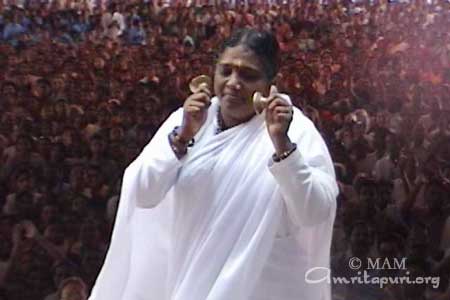 And what a treat it was. We have all seen pictures of Amma dancing in ecstasy, years ago. We may have even heard the tinkling of ankle bells from the open windows of Mother’s room, late, late at night, and pictured Her dancing alone. On foreign tours, even today, Mother sometimes dances with retreatants: after they form a large circle, Mother starts dancing along the inner circumference, passing each person until She returns to the point where She had started dancing.

But on Onam in 2001, with thousands of Her children gazing from the floor of the huge new auditorium, Mother danced, there on the stage.

The music was irresistible. The musicians – singers and instrumentalists – launched into a traditional Kerala boat song, only the words had been replaced with lyrics about Amma. The beat was lively, but moderate. With a lovely smile, Amma began marking the tempo with Her hand bells. The smile remained as She moved gracefully from left foot to right, to left, to right, there in place, just in front of Her pitham 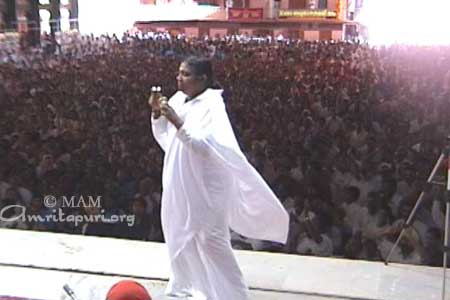 In less than a minute, it was clear that the dance was not proceeding in quite the way it had started: Mother smiling, tempo moderate, all “in order”.

Mother was no longer smiling: now Her expression made a smile trivial. There was a transparent clarity: radiance. Her eyes were closed, and did not open for the next ten minutes.

Unseeing, She danced on, circling gradually to Her left, never missing a beat, ringing Her bells, stepping from one foot to the other, in a world of Her own. Down below, standing shoulder to shoulder, Her children danced too. Lacking handbells, they clapped, many raising their hands high above their heads.

Like Her, they moved rhythmically from one foot to the other. But unlike Her, most of them kept their eyes open… for who could resist so stunning, and so rare, a sight as Amma dancing, Her brilliant white sari billowing from Her raised arms and Her brass bells flashing before Her darkly beautiful Face?

The tempo increased. Mother was no longer facing the crowd. Nor was She in front of Her pitham The circle She had begun to make was growing and was surrendering to something too free to conform to geometry. People around Her began to move away. They had already pulled Her pitham out of the way, and now they shifted their harmoniums and microphone stands, and dragged sound and electrical cords to the side, letting nothing impede the flow of Her Dance.

Faster. Eyes still closed. No longer on the carpet. Near the edge of the stage. A brahmachari jumps down to the ramp beside the stage and another joins him. They clasp hands and make a “fence” lest Mother come too near the edge. Some brahmacharinis appear, arms upraised, alert, ready. No one wants to touch Amma, or to inhibit Her dance, but care must be taken as She, oblivious, comes within inches of the edge.

She is brilliance silhouetted against a dark sea of exuberant dancers. Seen from the other direction, She is pure white Dance backed by rich colour. Her entire Form is movement, except Her Face, which is the embodiment of a stillness we don’t know, a joyful Mystery. Can it be that the music is growing even faster? Yes and Her bells never miss a beat as She raises Her Hands above Her Head, and by Her arms Her utterly peaceful Face is framed.

It is too much. A brahmachari slides Mother’s asana near Her, an invitation to sit. The musicians stop.

Can five thousand people be so silent that you hear only the gentle tinkle of two brass bells held in soft brown Hands? Yes. For a full sixteen beats.

Then the clapping of thousands of pairs of hands returns, the music stumbles back in, and devotees who were reserved before are swept up in the divine dance. Only the careful watchers at the edge of the stage are not moving. Their stillness is a counterpoint to the dancing mass behind them and the shining Grace before them: they embody shraddha, sacrificing the excitement of joining in to concentrate on keeping Mother’s Body safe.

Two minutes more of dancing and suddenly, without allowing the cadence to diminish, Mother sits down. Not on the small carpet they had placed nearby; not on Her pitham; not front and center. No; She simply sits on the bare floor about six inches from the edge of the stage, very close to the east corner. Sits still. Silent. In the midst of stillness and silence.

Her Face an unmoving Mystery.