In order to help people with cardiac conditions avail of real-time, ECG-monitoring without hospitalization, Amrita WNA has designed a prototype for a low-cost, low-power, wearable ECG-monitoring device called Amrita Spandanam.

Amrita Spandanam will allow postoperative cardiac patients as well as people with cardiac conditions to avoid hospitalization for the sake of continuous vital-parameter monitoring.

Amrita Spandanam, which can be worn either as a necklace or as a belt, continuously monitors and analyzes a patient’s ECG. The ECG data is sent wirelessly, in real-time, to the patient’s cardiologist/doctor, with alerts if a patient seems to require examination. Doctors can avail of the live-feed through their mobile phone, making monitoring possible even when both the patient and the doctor are mobile. 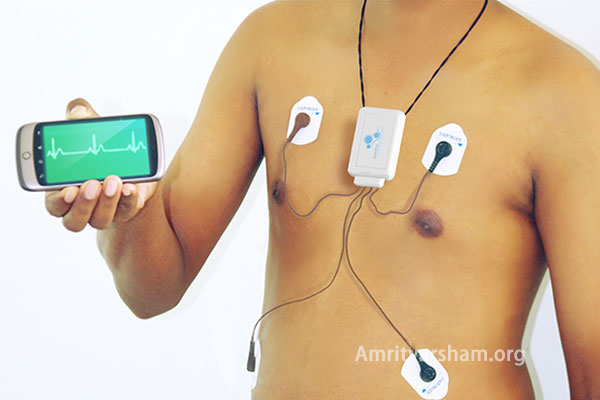 According to Dr. Maneesha Sudheer, the head of Amrita WNA, “When discussing potential wireless R&D projects, Amma would lament the number of poor people she has seen die from cardiac conditions in their 40s and 50s. She told me, ‘It is science’s responsibility to give such people the 30 or 40 years back by which their lives are being cut short and help them to lead full, productive lives.’ It was with this end in mind that we started working on an affordable wearable wireless system for real-time monitoring of cardiac patients.”

The Amrita Spandanam prototype has been designed so that the data will also be automatically logged into Hospital Information System at Amrita Institute of Medical Sciences in Kochi.

The Amrita Spandanam prototype will be unveiled on September 26, 2013, at Amritavarsham60—The 60th Birthday Celebrations of Sri Mata Amritanandamayi Devi, Amma.