AYUDH , or Amrita Yuva Dharma Dhara, which means “the youth which perpetuates the wheel of dharma (righteousness)”. AYUDH, founded in 1985 is the International youth movement of Mata Amritanandamayi Math. AYUDH seeks to empower young people to integrate universal values into their daily lives. Starting with themselves, AYUDH wants to help establish a future of hope, peace and social engagement while maintaining an awareness of spiritual principles. 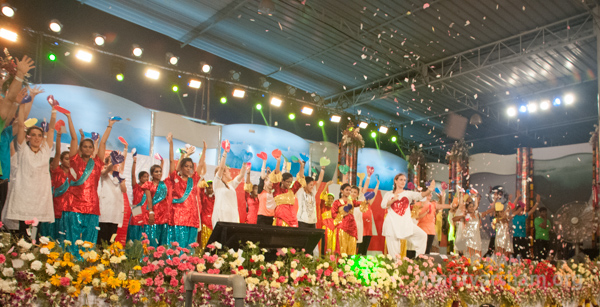 AYUDH started off their performance with some thought provoking rapping along with a fire dance. Aparna rapped (in malayalam) that nothing is impossible and we should embrace everything with the same amount of love and her control over the language, being a foreigner is worth mentioning. With colorful posters and beautiful transitions between dances, AYUDH captured the attention of the audience, and touched their hearts as well. The message that AYUDH wanted to convey is ” color the world with love”. Let the world be one! This was not a one -step destination; but a never ending unfoldment. The boundaries have to be broken and this has to start from within only then will the future be bright and peaceful. 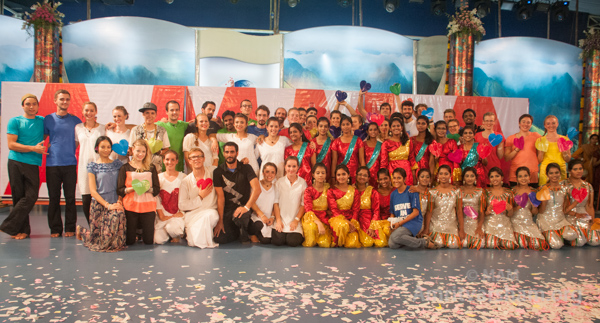 They ended the performance with a demonstration on women protection and some things that a woman could do to defend herself. It was a true picture of a challenge that women face in today’s society. This shows the commitment and concern that AYUDH has in issues relating to the society and their vision of a better world, where it is safe for our mothers, sisters and daughters.

With Amma’s loving guidance and blessings, may AYUDH be able to spread the message of love and peace to society – on the wings of a dove.