Amritavarsham 60 had a splendid array of kaleidoscopic cultural performances spread over three days – the haunting melody of the flute, the clarinet and the sitar, the entertaining duels of Jugalbandhi, divinely enchanting Odissi & Kuchipudi dances, soul-stirring Hindustani and Baul music, breathtaking Mridangam, feet tapping Bhangra, energizing Afro Fusion, rocking western music and, of course, traditional folk music & dance of Kerala. It was a beautiful garland strung with flowers of different hues offered at the Lotus Feet of Divine Mother. Or, shall we say a beautiful crown bedecked with different jewels to adorn the Queen of the Universe?
One such jewel in her crown was Kavadiyattam. 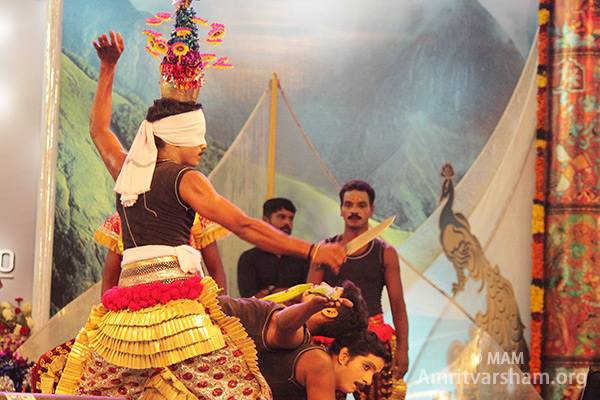 Kavadiyattam, a colourful ritual art, is a votive offering to Sree Subramanya. Basically of Tamil origin, Kavadiyattam is widely prevalent in the Subramanya temples all over Kerala during the festival seasons.

Dressed in bright yellow or saffron robes, devotees performing kavadiyattam smear vibhoothi or sacred ash all over their body. Each one carries on his shoulder an ornate Kavadi – a huge bow, richly decorated with peacock feathers, (it is believed that the peacock is the vehicle of Sree Subramanya). Kavadiyattam literally means dance carrying a kavadi. The dancers twist and spin in a row, gradually move in a frenzy, in step with the rising beats of percussion instruments.

Those of us expecting this “traditional” Kavadiyattam were in for a surprise! As the sun rose on the morning of Day 3, the humble group from Kozhikode blossomed on stage, slowly unraveling a performance par excellence.

While the kavadis were indeed on display, with the traditional music & dance going on, one of the performers started his amazing show – a shocking display of various feats that left the audience speechless! It was as if Amma is giving a message – the human mind and body have immense potential; we need to cultivate them through practice, patience and perseverance. 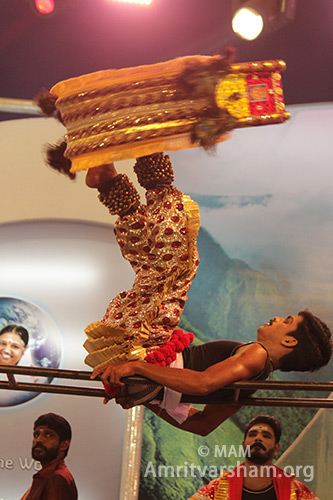 First was his walk over a ladder held horizontal by his teammates and picking up a soft drinks bottle with his mouth and emptying it. Well, what made this a “feat” is the fact that he was balancing a pot on his head all along, and his dancing steps accompanied the drum beats in perfect rhythm. It was beautiful to see the pot sliding on the head, as it went up and the drink went down his throat, all his movements never missing the rhythm of the music.

As the tempo of the music increased, this highly talented artist’s demonstration became more and more spectacular. The best sequel was the ‘blindfolded act’. With blindfolded eyes, he was given a sharp knife. Another artist lay down with his hands outstretched, a banana in each palm. After a minute of concentration, the main artist cut the bananas to pieces! Next, bananas kept on the throat and stomach were shredded with clinical precision!

What followed was a jaw-dropper! It showed the power of the mind, of concentration. As prayers arose spontaneously on the lips of the performers as well as the audience, the knife in the hands of the blindfolded one came crashing down on a coconut on the belly of the other, who was lying down! The coconut was cut exactly to two pieces!

This was not the usual Kavadiyattam. This was something special – a unique gift from a relatively unknown (in comparison to the world-renowned artists who had performed thus far) group to their beloved Mother. And, Amma seemed to acknowledge it as she turned to look at them from time to time, even stopping darshan for a few seconds.

May her blessings flow to this team and grace them with more and more success!