“Welcome Amma to Suomi (Finland)” was the call from many of Amma’s children who had gathered at the Helsinki airport to welcome Amma to Finland, the first stop of her European Tour 2013. The two day programme in this beautiful Scandinavian country was held at the Energia Arena in Vantaa in which thousands participated. 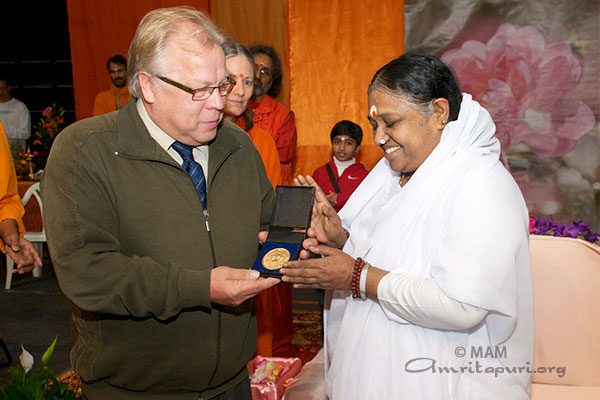 On the first morning, Amma was given an award by the European Central Association for Legal Protection in Finland. The award was in recognition of Amma’s humanitarian work throughout the world and for being an Ambassador of Peace. Before giving the award, Mr. Jarmo Juntunen praised Amma’s humanitarian work and described Amma as an inspiring example for their association’s work. “Amma’s example has given us a lot of encouragement and energy to continue with our work of providing assistance on a voluntary basis to those in need of legal help.”

Amma delighted her Finnish children with the Finnish rendition of “Nirmala Snehame,” one of Amma’s Malayalam bhajans. The audience clapped in joy as Amma finished the song. During darshans there were musical performances by renowned artists Annilina Ahven, Olavi Uusivirta, Katri Ylander, and Matti Salovaara. At the end of the first day’s darshan, Amma’s Finnish children also brought a beautiful cake to Amma, wishing her a Happy 60th Birthday. Amma cut the cake into many pieces and made sure that all her children present in the hall got a piece of it. 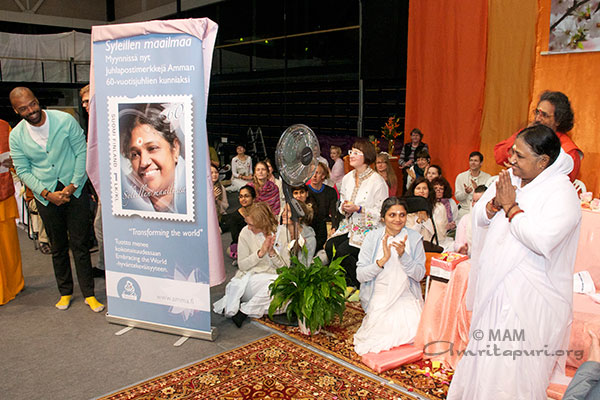 On the occasion of Amma’s visit, a postage stamp of Amma was released on the morning of the second day by Mr. Jani Toivola, honourable Member of Parliament. The stamp commemorating Amma’s 60th Birthday and with the message ‘Syleillen Maailmaa” (Embracing the World in Finnish) has a beautiful photo of Amma on it. Speaking on the occasion, Mr. Jani Toivola expressed his happiness on being able to see Amma once again and expressed his deep appreciation for Amma’s work that creates opportunites and platforms for people, especially the youth, to feel empowered.

You may recollect that 10 years ago Amma has made her way into yet another Finnish school textbook for students in senior high school. {news} 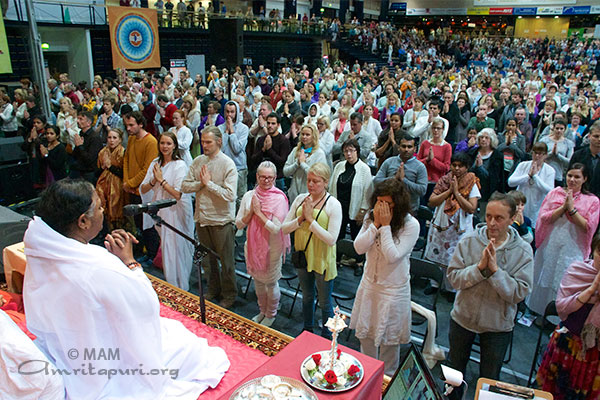 The Arena was completely packed for the Devi Bhava which went on till the early morning hours. During the night filled with the devotional bhajans led by the swamis and the local satsang groups, there was also the soulful rendition of songs by the famous rock band Von Hertzen brothers, which enthralled one and all. As the end of the Devi Bhava neared one could see the glimpses of happiness mixed with sadness on the faces of her Finnish children. Happiness because of being with Amma and sadness because of the thought that they have to wait till 2015 for Amma’s next visit to the country.