S Gurumurthy, a noted journalist and proponent of the Swadeshi economic development project, delivered an inspiring speech. He shared his experience of being here in Amritapuri, and being here with Amma: “When I saw Amma for the first time, I could immediately see how people would have felt when they saw Ramakrishna Paramahamsa. I saw a huge a comparison between Ramakrishna Paramahamsa and Amma: both of them are considered ‘not literate’; both of them come with a stock that had nothing to do with modern education and science and technology. But here, you see a merger of science and spirituality.” 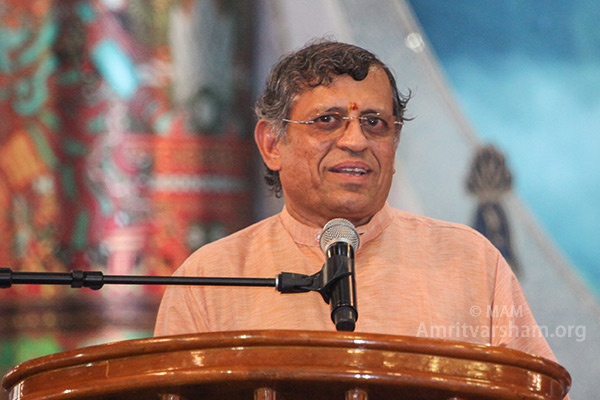 He also stressed the importance of Amritavarsham being a foundation for scientific innovation and advancements that can help people. He stated that he was concerned with the current spate of problems facing India, and all the possible issues that India may have to face as a nation in the future. But, coming to Amritapuri, he said, “When I came here, there is a kind of relief, a kind of peace, which one can only experience and one cannot express.”

He expressed hope about India’s future, citing the United States’ National Intelligence Council’s report India will be one of the 3 world powers by 2030, he believes that the secret to India’s success lied it’s illustrious past and spiritual heritage. “That is why from Vallikkavu, Amma is echoing the spirituality of India throughout the world. And this demonstrates that the Indian spiritual power will correct this world”. He expressed his gratitude to Amma helping bring about such wonderful changes, and declared that the world could definitely use some intellectual and moral guidance from India.