After the soothing performances by Amrita Vidyalayams, Guru Bijaya Kumar Shaoo and his team of 7 to 15 year old boys of Naxatra Gurukul, Odisha thrilled the audience with their Gotipua dance, an Odissi dance form. They have performed earlier this year in January, at Amma’s public program in Bhubaneswar, and it was indeed a pleasure to have them here at Amritapuri. 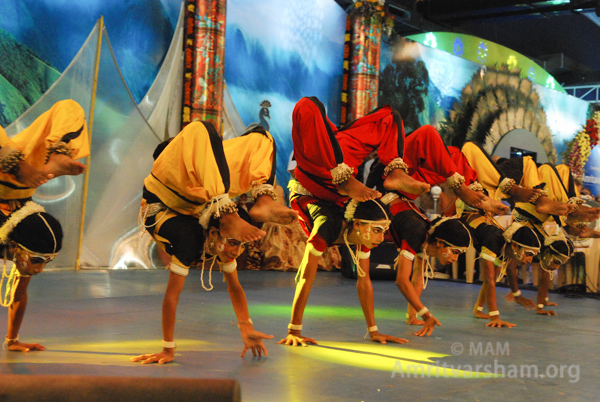 For centuries, young boys, who dress up as females to praise Lord Jagannath and Lord Krishna, have performed the Gotipua dance in Odisha. The repertoire of the Gotipua dance includes – Vandana prayer (worship prayer) , Sa Ri Ga Ma (a pure dance number, celebrating beauty and highlighting mastery of technique) and Abhinaya (enactment of a song, interpretation of poetry of ancient writings). It is largely from the Gotipua dance that the present form of Odissi dance has been inspired. An interesting part of Gotipua is Bandha Nrutya, the presentation of acrobatic yogic postures (depicting the mythological scenes from the life of Krishna). The difficult and intricate poses (requiring suppleness of limbs) are known as bandha (“acrobatic” in the Oriya language).

The dance started with the lively singing by Guruji and the vigorous beats on the tabala, upon which entered the “dancers” (these little boys who did not AT ALL seem to be boys!). It was truly an incredible sight – these young boys immaculately dressed up as girls…it was all done so perfectly you could hardly tell the difference!! The costumes, the eye makeup and of course the body movements all helped enhance the effect.

The first part being Vandana, they displayed forms of Lord Ganesh, Lord Vishnu, Goddess Durga, Lord Shiva and the Sun god through group formation. The Nataraja pose and the magnificent form of Shiva and Goddess Durga were truly eye-catchers! 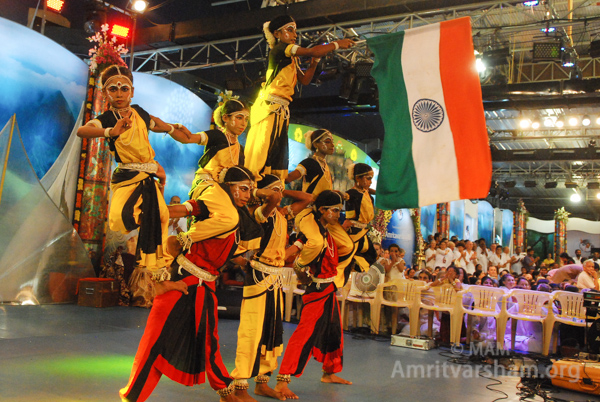 Then the second part – the Abhinaya was marked with vibrant beats accompanied with equally energetic dancing. The sounds of the ghungroo seemed divine. The difficult hatha yogic steps were performed with absolute ease, showing the perfection of their training and their passion for the art! The occasional statue poses were put forth with much precision. The whole act instigated feeling of an offering at a temple.

Next, the Bandha nrutya was an astonishing mix of various poses. Seemed like a yogic pranam. Amma’s children inclined to yoga enjoyed the act thoroughly, bowled over to see such young boys perform such difficult poses with suppleness and ease. Some poses left all of us awestruck! Seemed like they did not have bones at all… limbs?! Or just flexible rubber fit in? It was fascinating to see these kids perform such unusual steps and acrobatics! The tenderness of young bodies were put to perfect use.

The performance ended with an acrobatic group formation with the topmost waving the Indian Flag – to which Amma, along with all her children, applauded with enthusiasm!
This was a radically different offering of tender bodies, pure minds and innocent hearts to their Mother on her 60th Birthday.