P Parameshwarji, The Director of Bharateeya Vichara Kendra, gave a rich, rousing and historically significant speech, as he connected the past, present and future in one thread and highlighted the importance of Amma’s 60th birthday. He was one of the cultural leaders who joined to inaugurate the Spiritual Study Center of Amrita University. Speaking on the occasion he said:

‘Amma is the physical manifestation in the present time of that Adi Parashakti (primordial power).’ 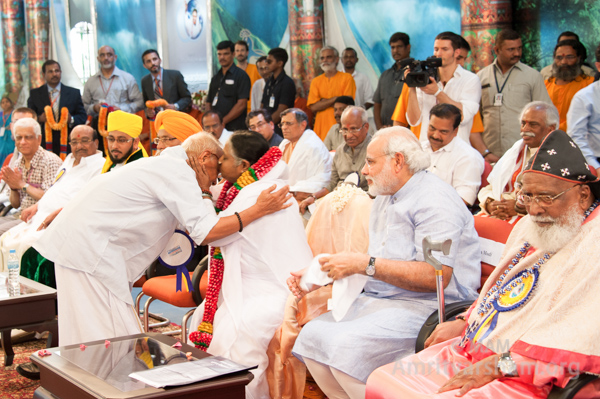 He was amazed at the multicultural unity that was seen among the people, and how every one of them were drawn towards this event, ‘People were flying in from God knows where…who called them? Why did they come? What was the call? We all know that it was an inner call.’

He talked about Amritavarsham 60 as a national celebration and a national event of epic proportions. He drew parallels with Swami Vivekananda’s 150th birth anniversary, and Swami Chinmayananda’s centenary, both of which fall on this year!”

“At a time when morale of the country is down the ladder, when people are frustrated, and disappointed at that time, we find a wonderful transformation coming over, and Amma’s 60th birthday is the symbol of the wonderful dawn that is going to break. As swami Vivekananda said, ‘The longest night seems to be passing away, the pains are coming to an end, and a new dawn of peace and prosperity, along with religious tolerance and coexistence is beginning. A dawn that, as Amma often says, ‘Lokah Samastha Sukhino Bhavanthu.’ No difference in caste, creed, religion or continent. A new dawn for whole humanity.”

“Swami Vivekananda used to say, the transformation must be spiritual, and it must start from Bharat. Bharat is the country that has devoted itself, for thousands of years, to spiritualize mankind. Bharat must change, must be transformed. A new Satya Yuga has to dawn, and the presence of Amma, the very spiritual embodiment of Bharat” 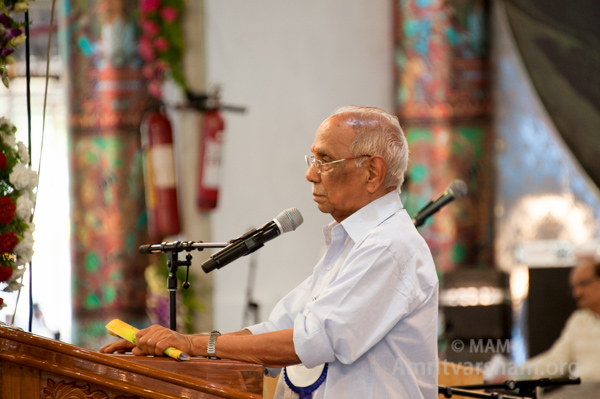 “This assemblage is not just an assemblage to celebrate 60th birthday of Amma. , it is an assemblage to pray and wait and welcome for a new dawn, which will once again make India the Jagad Guru of the world. Let us all bow down at the feet of Mata Amritanandamayi Devi, who has brought us all closer, and we are all fortunate to be here” said P Parameswaranji .