The Honourable Chief Minister of Gujarat, Shri. Narendra Modi, opened his speech at Amma’s Ahmedabad program by saying that the state is still indebted to Amma for the way in which She came to its aid in 2001. The Honourable Minister was referring to the three villages the ashram completely rebuilt in Kutch following the devastating earthquake there. “If we look to Amma,” he said, “we can understand what service is that is given irrespective of caste, creed or religion.” 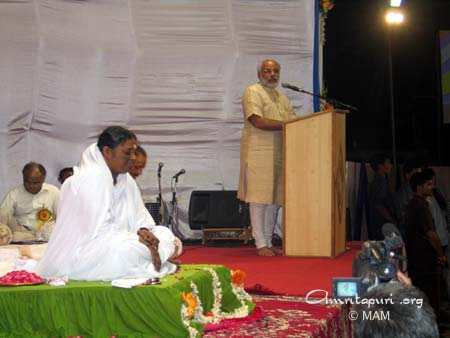 Shri. Narendra Modi went on to say how the nation is made up of Rishis, Saints and Gurus—not by politicians—and that any development the nation is seeing is only due to such holy ones. “Amma is a pearl in India’s Guru tradition.” 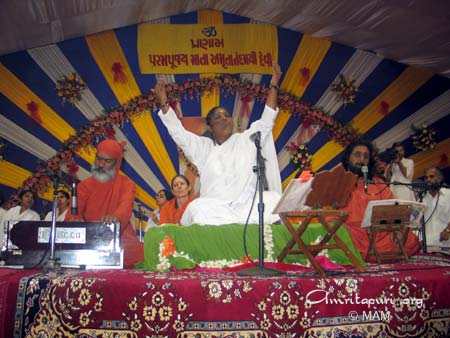 Also receiving Amma on the dais was the Mayor of Ahmedabad, Smt. Aneesha Begum Mirza, who prayed to Amma to bless Gujarat and make it always a place of peace.

Before Amma began Her satsang, bhajan and darshan, the Honourable Minister assisted Her in distributing checks to a number of women, representing the thousands of destitute Gujarati widows who will now begin receiving free pensions as part of Ashram’s Amrita Nidhi program.