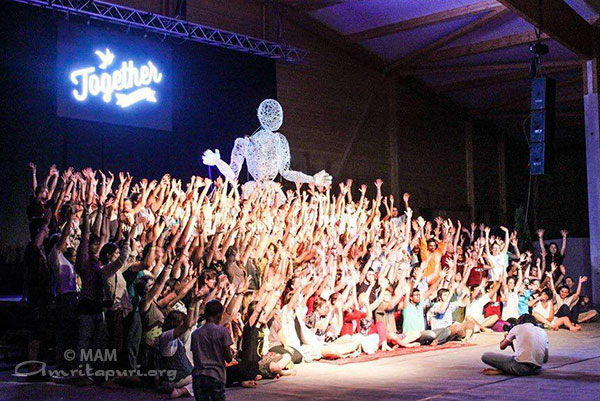 The Youth Summit was packed with an a variety of events: Motivational talks, wide range of workshops, anti-cyber-bullying campaign, sports competitions, music video shooting, picnic and a spectacular music and dance show to conclude the week. Spiritual practices were offered every day, including meditation, devotional singing and yoga.

Renowned personalities from various fields gave inspiring talks related to the theme ‘Together We Can.’Israel’s ex-minister for education and current member of parliament Rabbi Shai Moshe Piron led an interactive session with Adi Altschuler, a social activist from Israel, who was selected as a ‘Next Generation Leader’by TIME magazine. Adi related her story of founding the large youth movement ‘Krembo Wings’at age sixteen, opening thirty-five branches across the country with three thousand youth volunteers to interact and become friends with disabled children. She encouraged the youth to effect change in society by taking a leap of faith and follow their dreams and visions. Rabbi Shai Peron gave beautiful insights into the changes that need to come into the education system, and also surprised everyone by playing the guitar and teaching a Hebrew peace-song to the audience. 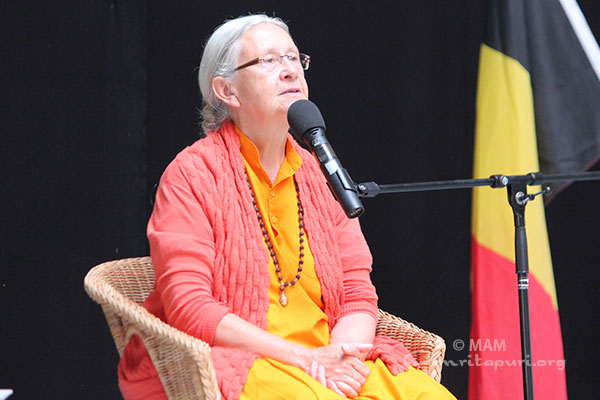 Manish Pandey (UK), writer of the Bafta winning documentary Senna, related the turning points of his life and by example captivated and motivated the audience. He highlighted how any successful project relies on the spirit of togetherness and contribution of all members involved.

Award-winning Italian filmmaker Marzia Mete presented her inspiring musical video ‘Motherless Child’which was themed around ‘finding a home’. She expressed her support and views on giving care to the homeless.

Lucia Rijker, six times Kickboxing and Boxing world-champion, attended the summit for the second time after 2011. She inspired all attendees with her speech and gave wonderful answers in the Q&A session that followed.

Bri. Dipamrita, leader of the NGO ‘Embracing the World France’gave an impactful speech on the current climatic changes and the urgent need to act together in order to avoid a global catastrophe.

To top it all, during the last couple of days Br. Shubamrita led incredible seminars and discussions. His interactive talks were based on the topics: “Building a Vision of Life,” and “Team Building.” After the talk on building the vision, a symbolic tree of life was placed on the stage and every participant was encouraged to write his or her personal dreams, as well as goals to be achieved by the AYUDH community, on a paper leaf and attach it to the tree. 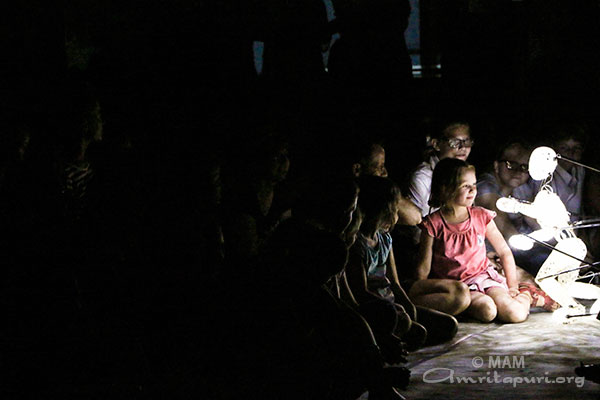 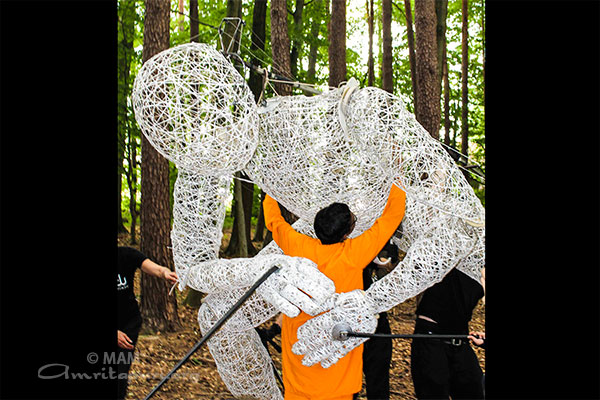 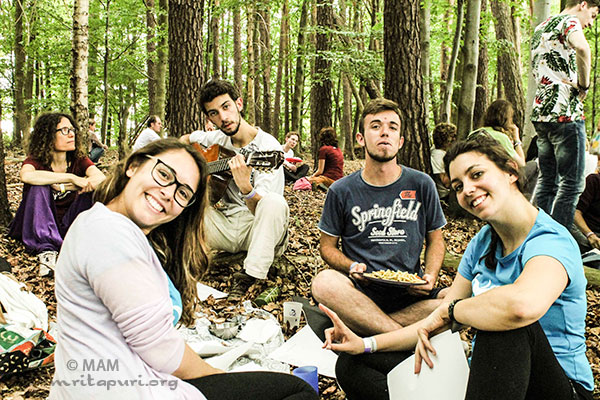 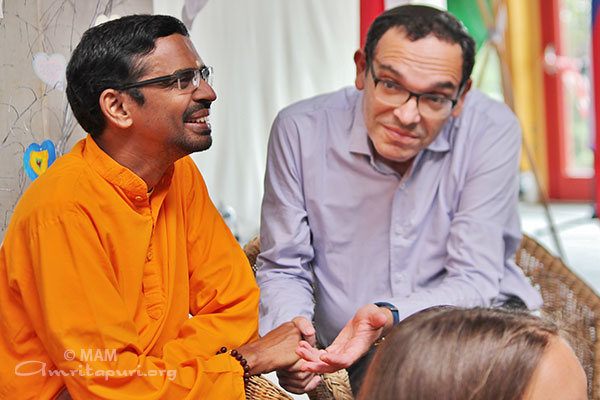 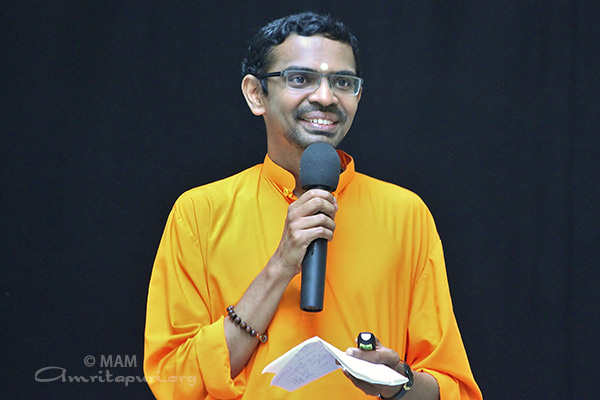 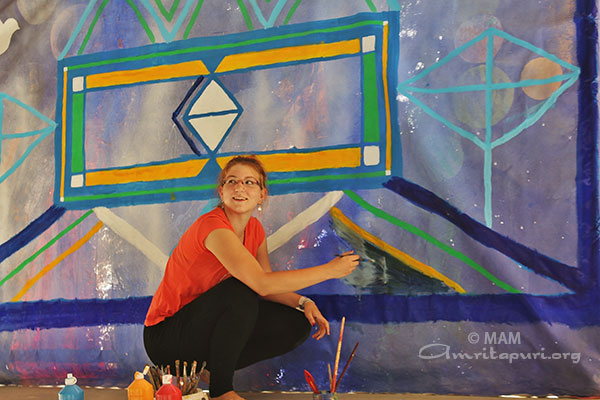 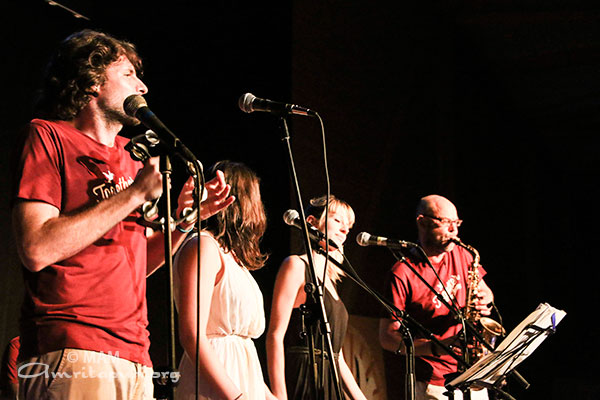 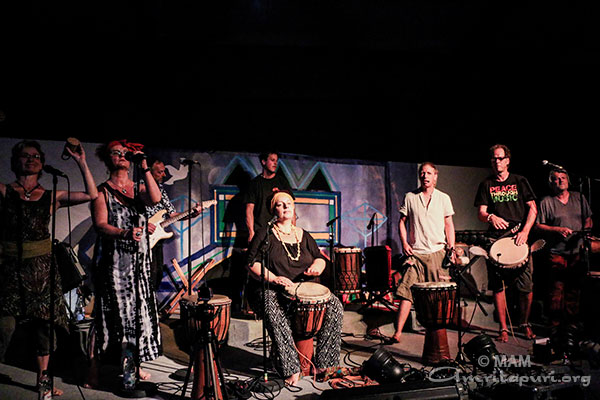 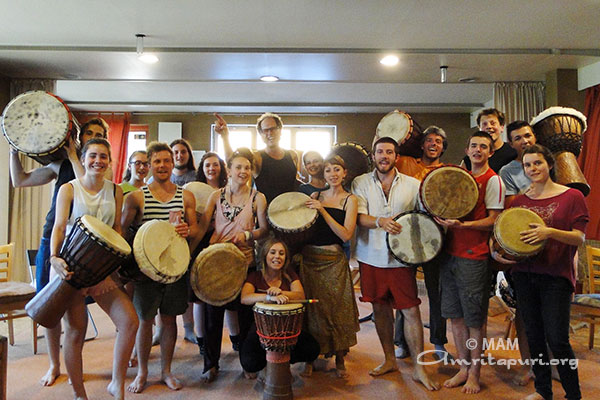 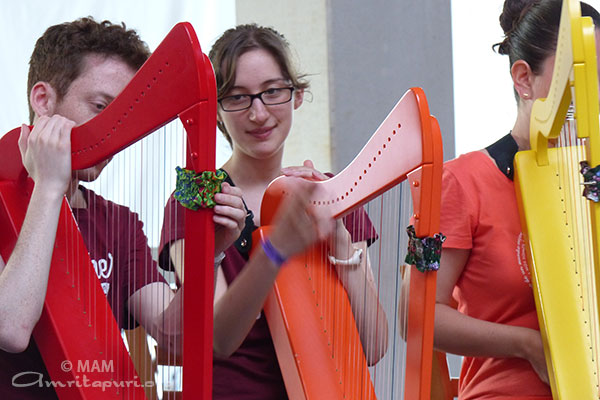 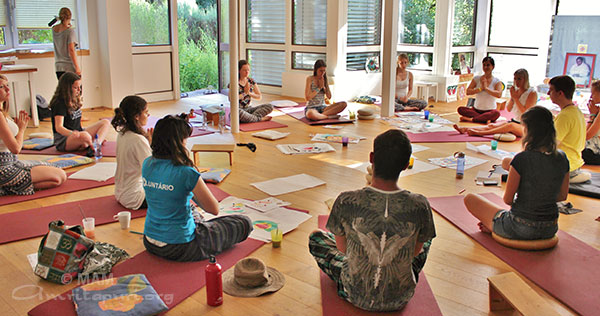 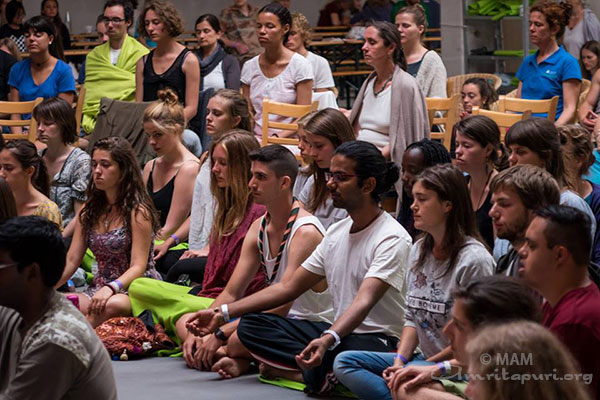 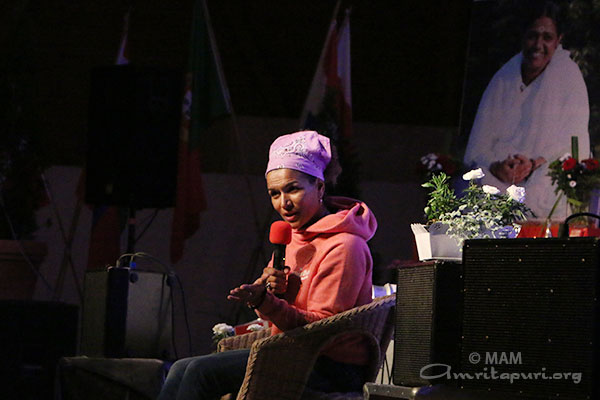 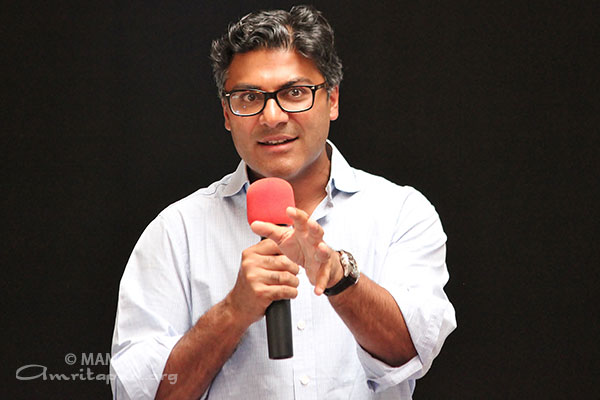 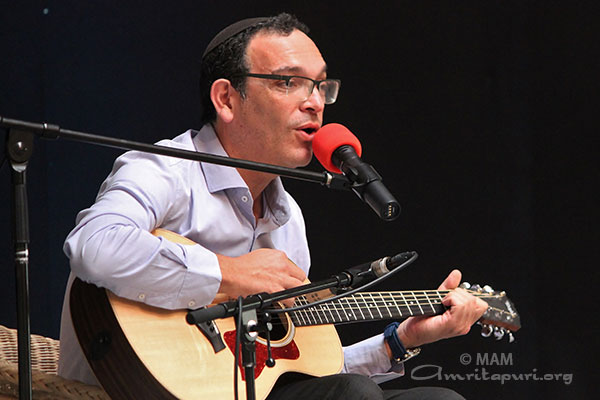 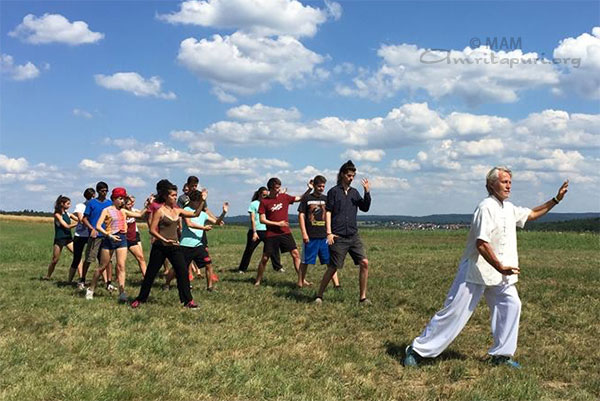 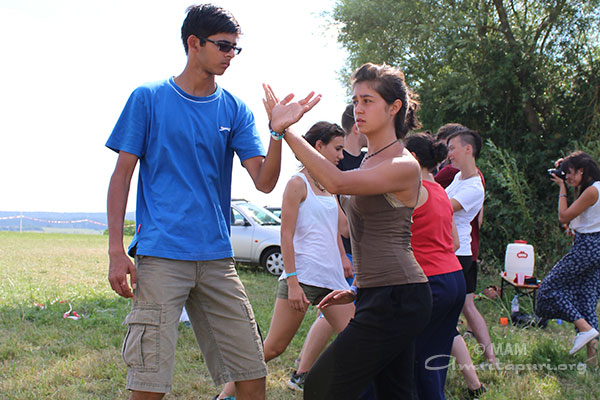 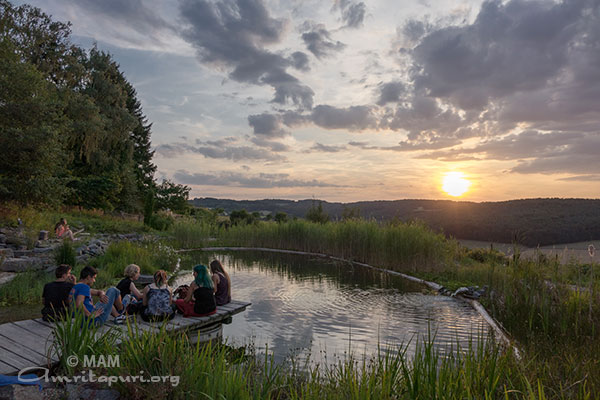 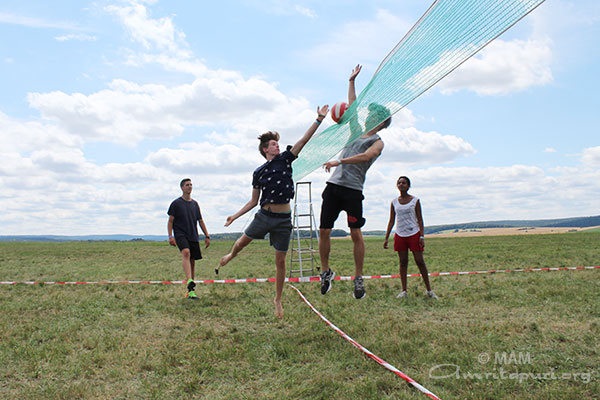 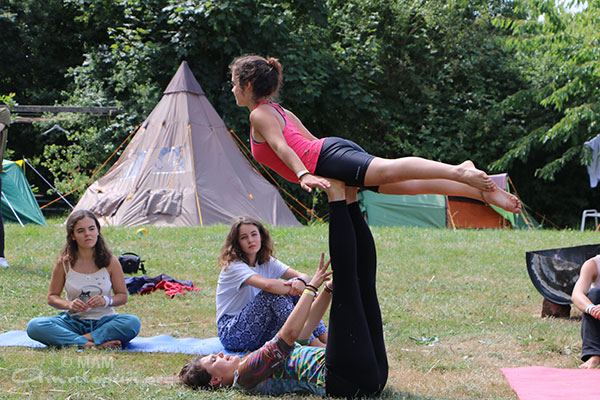 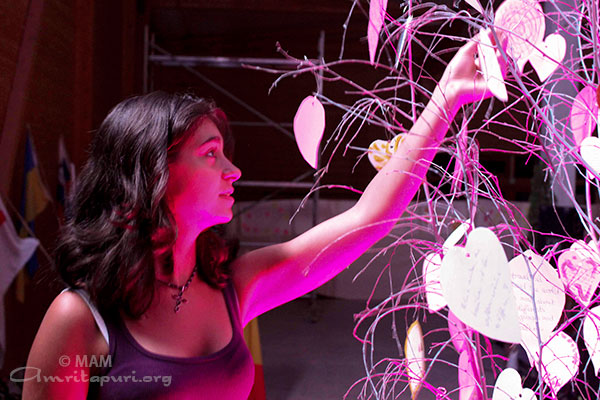 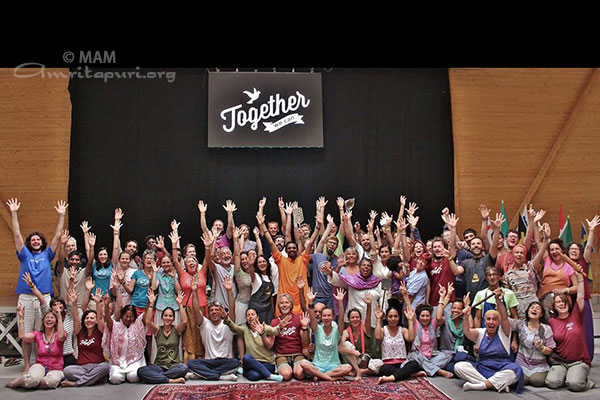 The finale of the Summit was marked by a multicultural festival called ‘OdenWorld’, which was attended by six 600 hundred people from the surrounding towns as well as guests from different parts of Germany and abroad. The concept of the show was to combine AYUDH talents with local artists from the Odenwald region. District Coordinator Dietrich Kübler addressed the gathering and expressed his admiration for the good work of AYUDH and Amma. The entertainment included musical performances from the local school’s band and the African Drumming Band Bingoma. AYUDH’s contributions ranged from classical renditions to traditional dances from the Basque region to the AYUDH band performing their hit songs and a seemingly never-ending version of Mata Rani.

The highlight of the evening was the appearance of Dundu – the giant of light – a gigantic human figurate that is self-illumined. Standing as a symbol for the unity and oneness of all people, Dundu impressed the audience with a mesmerizing drama and then in an unforgettable dance, concluding with the theme song ‘One Heart.’

Like every year, the Mayor of Brombachtal, Willi Kredel, handed over certificates of participation to all AYUDH members. The initiative was also supported by the Municipalities of Michelstadt and Brombachtal, and the Foundation of the Sparkasse, Odenwald.