Darshan was fast coming to an end at the first Pune program, when an unexpected voice was heard over the loudspeaker – Mother’s! In the midst of final hugs and murmurings into devotees’ ears, She called for a microphone. What She said was, “Get the lorry driver to move the truck up fast!”

Why would Mother be interested in the lorry? Why the rush? At the end of every program on the road, the lorry comes close to the bookstall and the stage, and brahmacharis (western and Indian male ashramites) load the boxes of books and photos and ayurvedic products, and the sound system, and the displays – everything in its place and ready to unload at the next venue. What was different tonight?

Tonight the brahmacharis would not do the loading. The women would. Western women and brahmacharinis together would do this “men’s job”. Mother was so enthusiastic about it that She wanted them to finish loading in time to come to Her for darshan – a very rare treat for people travelling with Mother.

But why should women do this job? Don’t they have enough to do, chopping vegetables and cooking vadas and making fruit juices? That’s women’s work. Loading trucks is men’s work. But just the day before, at a lunch stop along the road en route from Hyderabad to Pune, Mother had announced that She wanted the girls (women are girls, and men are boys, in the parlance of the Mother of All) to load and unload the buses and trucks next – and perhaps for some time to come. Were there any volunteers? Hands shot up; Mother took names; western women and brahmacharinis eagerly signed up and a work roster was made. Expectations were turned on their heads.

That is Mother’s way: to shatter assumptions, to break expectations, to push people into new and challenging roles, and to show us all that we are capable of far more than we (or others) have presumed. Women CAN be strong; men CAN be soft. Women CAN do “men’s work”, and men CAN do “women’s work”. Now and then, Mother decides to drive that lesson home; this was one of those times. 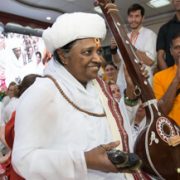 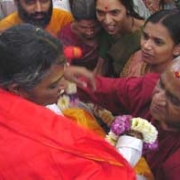 Science and Spirituality can be integrated

Amma arrives at her Pune Ashram