The United Nations has been focusing intently on the use of technology to solve global problems and drive development that’s both affordable and sustainable.

Amrita University itself is a lesson in innovation. It was founded not by scientists and scholars but by one of India’s most influential humanitarians and spiritual leaders, Sri Mata Amritanandamayi, who serves as Chancellor of Amrita University and believes that integration of the latest technologies with spiritual principles is the right way forward. 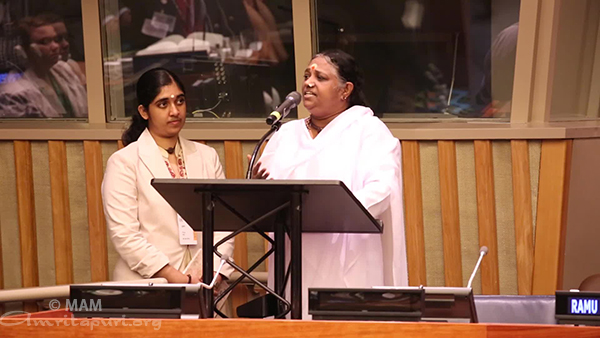 Amma gave the keynote address at the recent UNAI conference, stressing for the participants the Amrita University’s core tenet: progress that is driven by compassion and understanding for all people.

Amrita University has committed itself to the development of technologies to address these very concrete needs, without forgetting that human happiness and well-being also has a spiritual dimension.  Amrita have been joined in this mission by scientists and technologists from top institutions around the world, including Oxford, Cambridge, Stanford, EPFL, Monash, Twente, and the National University of Singapore.

Amrita and our fellow researchers presented a few of these solutions-in-progress to over 700 representatives from 93 international universities at a conference on Technology for Sustainable Development that Amrita co-hosted with the United Nations Academic Impact (UNAI) program, a global initiative that aligns institutions of higher education with the UN to advance sustainable development.

• Health and Medicine — The problem of increasing antibiotic resistance is a concern for people everywhere. We’re developing nanotechnology materials that can serve as a new type of antibiotic materials that will overcome resistance. We’re also developing more effective and nanotech-enabled vaccines and nano-therapeutics for diseases of the immune system, such as multiple sclerosis and diabetes; new and less toxic nanomedicines for combatting drug resistance in cancer. We have shown the potential of a light-based diagnostic tool for early detection of oral cancer that can save countless lives.

• Energy Storage – Many communities in India have little or no connection to an electric grid, but existing battery technologies have limitations of weight, cost, and storage. Nano-based solid-state thin-film energy-storage systems that our researchers are developing are capable of providing battery life of ten years or more and better storage capacity. The potential applications for better battery technology are exciting even for people with ready access to the grid.

• Education — The science of haptics is the science of touch and perception, using vibrations and other forces to simulate what it feels like to handle a tool or manipulate objects. Amrita and its fellow researchers are using haptic technology to address the need for effective and affordable training in construction and other hands-on vocational skills that men and women in developing communities need.

• Disaster Management – Natural disasters have caused an estimated $1.7 trillion in damage and killed more than a million people, just since the year 2000. One of India’s biggest concerns is landslides, so Amrita scientists have developed a novel Deep Earth Probe that can sense when landslides are imminent and then send out warnings so people who live in high-risk areas can move to safer ground.

• People have been practicing traditional medicine for thousands of years, notably in places such as China and India, and many of the herbal and nature-derived treatments are as effective or better than modern synthetic medicines. We are studying very carefully the mechanisms of action of these traditional medications and creating a new database that will help in bringing the curative aspects of these traditional medicines to the people. A good example is our demonstration of a traditional remedy for diabetic wound-healing made from the outer shell of the cashew nut that can potentially save many limbs from amputation due to incurable diabetic wounds.