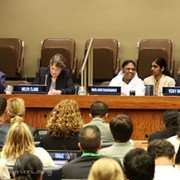 I jotted down eight of the points that the Administrator [of the United Nations Development Program, Helen Clark] referred to in our Looking Forward to 2030, the process we are trying to start today—poverty, discrimination against women, sanitation, waste water management, water resources, infectious diseases, biodiversity and social cohesion—and I was trying to reflect upon what the academic community can do upon this, and suddenly it occurred to me that on every one of these there has been a contribution by Mata Amritanandamayi, the [Mata Amritanandamayi] Math and Amrita University.

Poverty—Under Amma’s leadership more than 100,000 children [from] poor households across India have received scholarships so that they can get education to become working adults.

Discrimination Against Women— [Amma] has 6,000 Self Help Groups of women across India, and another 1,000 in the Andaman Islands, where women work with women to be able to create opportunities in what are referred to as the cottage industries and the small-scale sector.

Sanitation—Under Amma’s leadership women are being taught plumbing, masonry, wiring, so they can construct the toilets that they have been denied by the history and by the heritage, and [they are also taught] the rules and basic principles of hygiene, so that the problem of lack of sanitation can be resolved through personal commitment and endeavor.

Waste water Management—The Amrita Institute of Nanotechnology is working on a remarkable program where they create what they call “microbial fuel cells,” using bacteria in waste water as a source for energy, while at the same time cleansing the water and making it potable and fit to drink.

Water Conservation—Another program called “In Deed With Nature,” where people are taught through courses on how they can conserve water and, again, access it when they need it, so that they conserve it at a time when they have a surplus. Again, Amrita University

Infectious Diseases—You have again the Institute of Nanotechnology at Amrita University that has set up laboratories working on every aspect of disease control. And the fact that you have to have two considerables in this: 1) good quality and 2) affordability. And that is the secret of treating diseases, infectious and otherwise. But, in particular, a laboratory has been set up specifically for infectious diseases at the university.

Bio-Diversity—Amrita University is located in the Western Ghats of India, one of the 18 biospheres declared in the world. And since it began 13 years ago, it has planted 100,000 trees on the barren landscape of where the campus began. It has used technological innovations native to that part of India, using coconut husks at the bottom of pits so that they can retain moisture and fertilize the trees that have been planted there. That is Amrita’s contribution to Bio-Diversity.

And, finally, the very telling point that the Administrator [Helen Clark] made about Social Cohesion. And this goes back to Amma’s program of Embracing the World and the philosophy that at the heart of social cohesion, at the heart of the global peace we seek, must be the warmth, the compassion, the understanding of person to person. And if that begins, if you embrace another individual, you embrace the world. That we owe to you, Amma and to your leadership.

I am now honored to ask the Chancellor of Amrita University, Mata Amritanandamayi to speak.

When Amma spoke about reconciling the heart and intellect, I think, as most of you know, we are at the United Nations an organization of acronyms.

Ambassador Nambiar would recall that the year that he joined the Indian Foreign Service, we had a conference in Delhi of the United Nations conference in Trade & Development, and we had signs all over Delhi saying “UNCTAD”… “UNCTAD”… and people said, “What does UNCTAD stand for? And someone said, “Under No Circumstances Take a Decision.”

But we’ve progressed since then, and I think that the one thing that we have achieved in the MDG’s and the Millennium Development Goals is the fact that we have to really not only be aware of a situation, but to take action, and that leads me to the acronym—which I would like to propose to you—which is going to animate START-AMRITA: “Awareness Must Result in Taking Action.”

And we are going to begin that collaborative action today with a portal which Amrita University has designed at the request of the Department of Public Information and the United Nations Academic Impact. I’d like to invite Dr. Venkat Rangan to please join me as we launch this portal, and thank you, Swami Amritaswarupanandaji, for being with us as well. 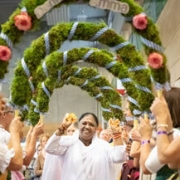 Amma - A role model for decision-makers in politics and business 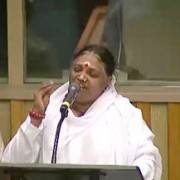 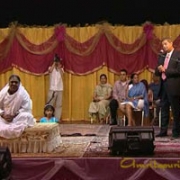 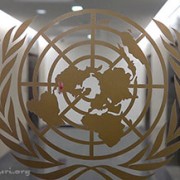 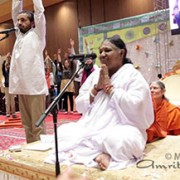 Engage others with respect, understanding and acceptance

Yoga helps us to reconnect with nature and God