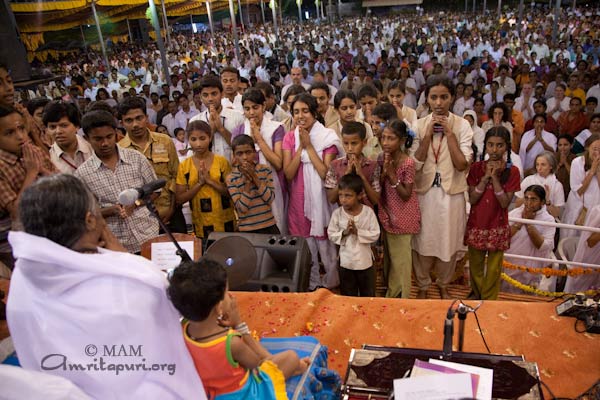 Amma has chosen some peace mantras for daily chanting by her devotees and disciples. One of those invocations is Om lokah samastah sukhino bhavantu. Although this mantra does not appear in any of the existent Veda sakhas [Vedic branches], it is an expression of the universal spirit that we find therein1. Let’s take a look at what context it appears in and what meaning it carries. The sloka as a whole reads as follows:

May there be well being to the people; may the kings rule the earth along the right path;
May the cattle and the preceptors of culture and wisdom  have well being forever;
May all the beings in all the worlds become happy;
Peace, peace and peace be everywhere!

The sloka is an invocation for harmony and blessings for all of creation. In ancient days the social structure and form of government differed from ours in many ways, that is why we need not take the literal meaning of this sloka, but the essence.

For peace and harmony to prevail, the kings–i.e. the politicians and leaders–should have a healthy approach towards their subjects and govern according to principles of dharma. This, we sadly note, is very rare indeed in today’s world where power and wealth seem to be the prime motivation for the ruling elite. Nevertheless, the ideal remains as it is, and as Amma’s teachings are personally influencing countless politicians all over the world, there might yet be light at the end of the tunnel.

Brahmin is one who has either realised his oneness with Brahman, the Absolute, or one who has dedicted his life to the pursuit of that realization. Such selfless people are the enlightened thinkers who provide society with a healthy understanding of life. They give guidance to all sections of society, including the political leadership. A Brahmin can also mean a brilliant intellectual who is using his talents to selflessly serve society. Thus for a stable and bright society, it is essential that these Brahmins are healthy. The sage who gave voice to this mantra obviously does not assert Brahmin-hood as a hereditary vocation as found today.

There are many examples in history to demonstrate that Brahmin-hood is an inner quality not dependent on the social status that prevails upon one’s birth. We need only to look back to the great sage Veda Vyasa, also known as Krishna Dvaipayana because he had a dark complexion and was born on an island. He was born to a fisherwoman but possessed one of the greatest minds of all times and is universally accepted as a great rishi. He codified the Vedas and composed original works that are famed all over the world for their exquisite spiritual content. Among them are popular works like the Mahabharata and Srimad Bhagavatam, as well as profound treatises on the Ultimate Reality like the Brahma Sutras. In spite of his humble origins, Sage Vyasa is one of the most revered among the plethora of India’s spiritual giants.

Amma was born in a community of fisher folk. She was educated only up until the fourth standard and speaks only her mother tongue. Also, most striking of all, she has never studied the scriptures. Yet their wisdom flows from her lips unceasingly, rendering the most abstract truths in simple ways that most anyone can understand. Who would then deny Amma’s Brahmin-hood? Amma is directing the world with her wisdom, speaking to large audiences throughout the world, even at the United Nations.

Now, one might wonder about the cattle in this prayer, saying to one’s self: “What on earth have I, a city-dwelling modern person, to do with cattle? Shouldn’t I rather be praying that my BMW stays in good condition?” We need not be too literal-minded. The ancients didn’t use language in such a one-dimensional way as we do. If we contemplate deeply on the meaning of any given mantra, it is likely that it will reveal more and more layers of meaning. “Cattle” signifies nourishment and abundance in general. In ancient time cattle served as a sort of bank account. The number of cattle a person had was the measure of his wealth. Also, the milk was the primary source of livelihood for a large portion of society. Milk and milk products such as ghee comprised the majority of the offerings made into the sacrificial fires used in formal ritual worship. Thus cows are mentioned in many ancient texts as a symbol of plenty. It can be taken symbolically, like “the daily bread.”

In today’s society, such a prayer, if taken literally, has also a special irony, for cattle ranches around the world have become breeding grounds for diseases like the mad-cow epidemic. When cattle and the rest of the animal kingdom are devoid of well being, humanity will also suffer. Thus harmony between humans and the rest of creation is also stressed in this prayer. Actually cow can be taken as representative of the entire animal kingdom. The Sanskrit word for cattle is “go,” which is a most profound Vedic symbol and has many subtle spiritual meanings. Two such secondary meanings are “earth” and “mother,” and as such the sloka could also be a prayer for the welfare of Mother Earth. So we need not be worried that God will send a herd of cattle charging through our living room when we pray thus.

The most important aspect of the mantra is that the sage does not pray only for his clan or nation but for the whole world or, more precisely, all the worlds2. This, as Amma tells us and shows us, is the correct way to pray. Instead of asking for something for our self, Amma advises us to pray for the whole creation. Praying for the welfare of all sentient beings–all humans, all animals, all plants—our mind becomes more expansive. Through such prayer we slowly can go beyond our limited egocentric concepts of self to identify with the entire creation, recognising its true nature to be none other than our own. And as we too are part of the world, we also are benefited from the blessings of the prayer.

Amma’s whole life is a constant endeavour to bring happiness to as many beings as possible. Her life verily is this prayer in action. She is showing us the correct attitude by which not only to pray but also by which to live vedas.

While chanting Om lokah samastah sukhino bhavantu next time, let us try to feel deeply for all living beings, and make a resolve to live in this selfless spirit.

May peace and harmony prevail.
—Vedarat
————-

1 Many of the original 1008 branches of the Vedas have been lost. It is possible that this mantra was in one of those lost branches. If not, it surely took birth from or around a Realized Master.

2 According to the traditional view, there are 14 worlds, or planes of existence–six figuratively above us and seven figuratively below. Bhuh is the earthly plane. Above it in ascending order are Bhuvah, Svah, Mahar, Jana, Tapa and Satya (also known as Brahma-loka); below in descending order are Atala, Vitala, Satala, Rasaatala, Talaatala, Mahaatala and Patala. These are generally divided into three zones: heaven (svarga), earth (prithvi) and the netherworld (patala). That is why one frequently comes across the expressions in the scriptures like “the lord of the three worlds.” If one refuses to accept that there are 14 worlds, they can consider the reference to multiple worlds as meaning the infinite perspectives of this world, as percieved by all the animals, plants and humans.