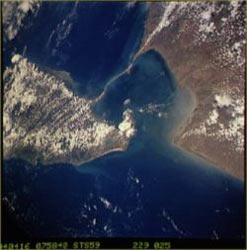 Ramanathapuram—or Ramnad—is located approximately 50 kilometres from the island immortalized as “Rameswaram” after Sri Rama’s army built a bridge from it to Sri Lanka in order to rescue Sita from the demon king Ravana1 . But Ramnad is not only significant for its proximity to Rameswaram. It has a rich spiritual history of its own.

After the maha-samadhi of his guru, Sri Ramakrishna Paramahamsa, Swami Vivekananda wandered for several years throughout the length and breadth of India. Towards the end of this period of parikrama, the spiritual visionary met two kings who encouraged him to act upon his idea of going to America in order to propagate Vedanta—the Maharaja of Mysore, and Bhaskara Setupati, the ruler of Ramnad.

Both kings offered to bear all of Vivekananda’s travel expenses. Swamiji left for America in 1893, where he won over countless hearts and minds through his discourses at the Conference of World Religions in Chicago. Swamiji returned to India in 1897. When Vivekananda came through Ramnad on his journey homeward, the horses carrying his carriage were unhitched and Bhaskara Setupati and the people of Ramnad drew Swamiji through the streets themselves—such was their respect and devotion for the dynamic samnyasin. 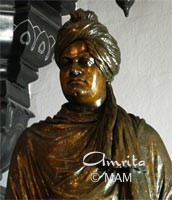 It was also in Ramnad that yogi and saint Sri Tayumana Swamigal performed austerities and ultimately took maha-samadhi2 in 1783. The sight of his samadhi is maintained to this day in the form of a temple maintained by Ramakrishna Math Tapovan.3

Tayumana Swamigal hailed from Vedaranyam, Tamil Nadu. His parents were devotees of Lord Shiva in the form of Tayumanavar {news} in Tiruchirapally4 , and they named him after that Lord. He was born in 1707. Tayumana was a householder who held the position of Minister of Finance in the then small kingdom of Tiruchirapally. However, he was spiritually inclined, and after the early death of his wife, he quickly became a disciple of Mauna Guru, a samnyasin who taught him both spiritual disciplines as well as passed on to him the spiritual wisdom of the advaita tradition in the Tirumular line. At some point, Taymana Swamigal relocated to Ramnad to engage in full-time spiritual discipline and contemplation.

Tayumana Swamigal enriched the canon of spiritual literature with 1,400 poetic verses that he began composing as a spiritual seeker and continued to do so as a liberated soul. One of the most famous of these is called the Paraparam. His verses were oft quote by Ramana Maharshi. Hailed as veritable spiritual guidebook, Tayumana Swami’s verses are simple, beautiful and packed with meaning. Many are in fact sutras5 meant for deep contemplation. Tayumana rarely mentions form in his devotional and instructional verses, but instead indicates the ultimate reality in terms of bliss and consciousness absolute. Two of his main themes were the absolute necessity of transcending the mind and of renunciation—be it internal or external—for realization to take place. All 1,400 of the verses remain available today in Tamil, with some having been translated into English by Swami Chidbhavananda of Ramakrishna Math Tapovan. 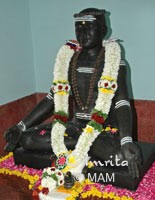 Although it is not a part of recorded history, according to the people of Ramnad, Sri Tayumana Swami’s maha-samadhi has an interesting tale behind it. The legend goes that the saint was absorbed in samadhi—completely unaware of inside and out, day and night. Seeing Tayumana Swamigal frozen in that supreme reality, some of his attendants believed that he had died. With sorrow it in their hearts, they erected a funeral pyre and began his cremation. However, as the flames reduced his body to ash, the poet saint began to sing, issuing forth final spiritual instructions to his devotees through yet more verses

The lure of the charming phenomenon is so enticing that people madly pursue it day and night. A few fortunate ones, after sufficient experience, come to know that pursuing it amounts to pursuing the will-o’-the-wisp. A few fortunate ones come to know the futility of this mad chase. Still, they repeatedly fall into its snare. Fewer still pray to the Lord to save them from the fall. Fortunate are the still few who strongly seek the grace of the Lord alone for their redemption.

The uncontrolled mind is capable of wrecking the entire spiritual career.
Still I hold fast to the ideal of vanquishing this demon.

O rare gold, O gem, O my love, intelligence residing in love, the flood of bliss that comes from my intellect; addressing you thusly, I sang, I danced. With a panting heart I sought your communion. I got annoyed with you. I shouted; with horripilation, I folded my hands and shed copious tears like rainfall. Being dejected in mind, I prayed for your grace.

As the moon vanishes from sight once a month, this phenomenon is also a passing phase.
O mind, be not drawn to it. Be not attached to vain disputation.

Silence is not in keeping the mouth shut; it is in the negation of the mind.

Woe unto me who am carried away by the advice of anybody and everybody. A girl ignorant and indifferent to sense pleasure seeks it ardently after marriage. As that is so, I, who am tossed about by varying views, will get fixed in divine bliss if I get a slight taste of your grace.

1 Satellite photographs have revealed a succession of slabs that look strikingly like a bridge linking the islands of Rameswaram and Sri Lanka.

2 When one who has realized his true nature as being the Self drops his mortal coil it is referred to as maha-samadhi.

3 At the request of the Ramakrishna Tapovan Math who manage the ashram and Tayumanavar Samadhi in Ramnad, Sri Mata Amritananamdamayi Devi visited the samadhi sight on 7 February 2007.

4 Tayumanavar literally means “He who also became a mother.” It is in reference to a tale from Tiruchirapalli wherein Shiva took the form of a woman’s mother in order to deliver her child.

5 A sutra is a short scriptural statement that reveals a great wealth of spiritual knowledge when contemplated upon.